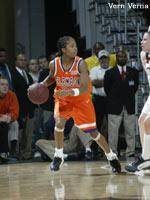 Clemson did not score in the final 5:30 of the game after leading 58-50. Auburn finished the game on a 10-0 run with Brackett scoring five points in the rally.

Auburn remains undefeated with a 11-0 record overall, while Clemson falls to 7-3 this season. Clemson will play at Miami (OH) on December 30, at 6:00 p.m. in the Lady Tigers’ next action.

The Lady Tigers were led in scoring by Chrissy Floyd with 24 point and freshman teammate Khaili Sanders who finished with a career-high 17 points.

Floyd was 10-16 from the field and 3-3 from the three-point line. She also finished with eight boards, three assists, two blocked shots and one steal in 38 minutes of play. Sanders also had 10 rebounds and two blocked shots.

Clemson opened the game with a 24-16 lead as Lakeia Stokes hit two free throws with 7:42 left in the first half. From this point, Auburn went on an 11-0 run and built a 27-24 advantage as Miller hit a jumper with 3:27 remaining. Clemson finished the first half by outscoring Auburn 10-3 and had a 34-30 lead at the half. This Clemson run was capped by Floyd’s three-pointer at the buzzer.

Auburn would score the next 10 points unanswered. Brackett hit a three-pointer with 4:40 left. Miller made a layup and was fouled on the play by Amanda White. Miller made the free throw and narrowed Clemson’s lead to 58-56 with 4:07 left. LeCoe Willingham tied the score 58-58 with 1:01 remaining. Clemson rebounded an Auburn miss with :12 seconds remaining. Kanetra Queen’s shot from the left side was rebounded by Miller with eight seconds remaining. Brackett was going in on a layup but was fouled by Lakeia Stokes with one second remaining. Brackett converted both free throws.

“We simply did not execute when the heat was on us,” said Clemson Head Coach Jim Davis. “We did not execute on both ends down the stretch and we gave them too many easy looks. We suffered through growing pains, and we aren’t playing smart. It was a tough loss today. We certainly need Leah Roper on the floor more than 11 minutes. At the beginning of the year, we had quality depth. I’m not making excuses, but it really hurts us being without two starters, (Maggie Slosser, and Julie Aderhold). I want to congratulate Auburn on the win, they wanted it more at the end.”

“It was a great college game,” said Auburn Head Coach Joe Ciampi. “We found a way, and I mean we found a way to win. I thought both teams played lethargic in the first half, probably because of the Christmas break. I thought the momentum changed when we tried to take Floyd out of the game in the second half. We were able to rebound better late in the second half and that was another big factor.”