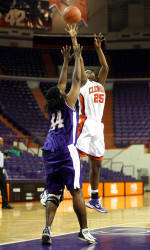 CLEMSON, SC – A short-handed Clemson women’s basketball team fell, 87-79, to DT3, a team of former collegiate women’s basketball players, in an exhibition contest at Littlejohn Coliseum on Friday night. The Lady Tigers were without the services of seniors Adrianne Bradshaw and D’Lesha Lloyd, who are both sidelined with injuries.

Freshman Whitney Hood led the youth-dominated team with 16 points on 6-for-9 shooting. The forward from Meridian, MS also pulled down five rebounds and recorded two steals in the contest.

Sophomore guard Cristy McKinney, while rookie Sthefany Thomas made all three of her field goal attempts and was 2-for-2 from the line for nine points.

The Lady Tigers won the battle on the boards by a 48-35 margin, led by Lele Hardy’s nine. Kirstyn Wright also posted eight rebounds in the contest to match her eight points.

Victoria Crawford, a former player at Auburn, led four double-figure DT3 scorers with 34 points. She hit 10-of-17 from the field and 12-of-14 from the free throw line. Amber Metoyer added 17 points with a team-best nine rebounds, and Sakellie Daniels tallied 11 steals for DT3.

Wright drained a three-pointer just eight seconds into the game and Clemson remained on top for the majority of the first half. The Lady Tigers stretched their lead to as many as 11 points at 26-15 after a Moreemi Davis lay-up at the 11:55 mark. However, a 16-5 run by DT3 during the next five and a half minutes tied the score at 31 apiece. The Exhibition squad then swung the advantage to 11 points for it on a free throw by Daniels with 1:19 remaining and DT3 took a 46-39 lead into the break.

Trailing by 11 (66-55) again at the 12:46 mark of the second half, the Lady Tigers outscored DT3 19-8 to erase the deficit. A lay-up by Hardy at 5:14 narrowed the gap to three points, while a three-pointer by Campbell followed a Crawford shot to put Clemson within two at 74-72. Campbell then intercepted a DT3 pass and drove for the lay-up to knot the score with 3:02 remaining.

The Lady Tigers took their first lead (76-75) since the 6:21 mark of the first half on a put-back by Hood. However, their late effort fell short as DT3 closed out the game on a 12-3 run for the victory.

Clemson will open its 2007-08 season on Friday, Nov. 9, as the Lady Tigers will play host to Maine at Littlejohn Coliseum. Tip-off is scheduled for 5:00 pm.