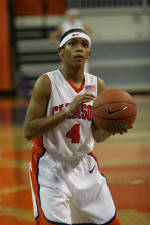 WINSTON-SALEM, NC – Clemson’s starting guards Christy Brown and Tasha Taylor posted a combined 35 points in leading their team to its first ACC road win in nearly three years. The Lady Tigers defeated Wake Forest by a 73-57 margin on Friday night at the Lawrence Joel Memorial Coliseum in Winston-Salem, NC to open league play with a 1-0 record and better their overall ledger to 9-7.

Brown scored a career high 18 points on 8-for-12 shooting while also collecting five rebounds and handing out four assists in the game. Her backcourt teammate Taylor totaled 17 points on the night with two rebounds, two assists, a blocked shot and a steal.

Yolanda Lavender led the Demon Deacons (8-6, 0-2 ACC) with 10 points while Alex Tchangoue posted a double-double with 12 points and 10 boards.

Taylor scored seven of Clemson’s first nine points to open the game and give the Lady Tigers an early 9-7 advantage. Wake Forest’s Lavender then hit a three-pointer to put her team on top at the 15:53 mark. However, Clemson held the Deacs without a field goal for the next seven minutes while scoring 12 points of its own to take a 19-12 lead with 9:06 remaining in the period.

Wake Forest fought back to within two at 21-19 with 7:26 left before Brown drained an open three-point shot to increase the margin to five points. Taylor made a basket underneath the goal and completed a three-point play after a Demon Deacon field goal for a six-point Clemson lead. Carrie Whitehust, in her first game back from knee surgery, then hit a three-pointer from the wing and the Lady Tigers took a 30-24 advantage into the halftime break.

The Deacs opened the second half on a 9-2 run before Whitehurst drained a second shot from behind the arc to put Clemson back on top, 35-33. The lead grew to 10 points at 47-37 as Hardy converted two free throws at the 14:09 mark.

The Demon Deacons managed to pull within six points, but the Tigers broke the game open with a 22-4 run. Brown’s short jumper with 5:10 remaining capped the run and gave Clemson a 69-45 lead — its largest of the game.

The Lady Tigers will welcome their first ACC opponent to Littlejohn Coliseum on Sunday afternoon, as Georgia Tech travels to Tigertown. Clemson will battle the Yellow Jackets at 2:00 pm.