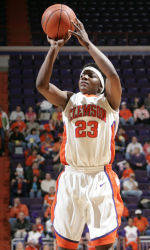 Rookies Lele Hardy and Morganne Campbell each received two awards on Sunday. Hardy, an ACC All-Freshman team member, was given the Newcomer-of-the-Year Award and was also the team’s leading rebounder. McKinney then presented Campbell with the Bill Nix Coaches’ Award and the Fairburn, GA native also garnered the Strength and Conditioning Award.

Sophomore Susan Yenser received the Academic Achievement Award as well as the Air Force ROTC Award; and red-shirt sophomore April Parker, who sat out the season after transferring, was honored with the team’s Most Improved Award.

Led the team with 85 offensive rebounds and 121 defensiverebounds Averaged 6.9 per game, the most of any ACC freshman and14th in the league overall

Had 142 assists on the year, the only player in triple digitsfor the statistical category Her 4.73 assists per game ranked firstamong ACC freshman and fourth overall in the conference Owned ateam-best 1.29 assist-to-turnover ratio which was also listedseventh in the ACC

Set the Clemson freshman record with 98 steals in the season,which was also the fourth-best performance in ACC freshman historyHer 98 steals also ranked second all-time in program history Ledthe Lady Tigers with 6.9 rebounds per game and ranked third on theteam with 11.6 points per game Started all 30 games in 2006-07Selected to the ACC All-Freshman team

Played in 22 games during the season, missing the other eightdue to illnesses Averaged 4.5 points and 1.5 rebounds per game Alsototaled 14 steals, 14 assists and four blocks on the year, whileconverting 24-of-33 free throws and hitting 10 three-point fieldgoals

Voted on by her teammates Led team with a 14.4 scoring averagewhile ranking second with a 6.5 rebounding figure, both of whichnearly doubled her prior career averages Scored in doubles figuresin 24 games in the 2006-07 season

Had the highest GPA on the team for the spring of 2006 and fallof 2006 semesters with a cumulative GPA of over 3.4

Air Force ROTC Award (Clemson Air Force ROTC) (Presented to the player who best exhibits the core values of the Air Force, as demonstrated by his integrity, service before self, and excellence in all endeavors) Susan Yenser