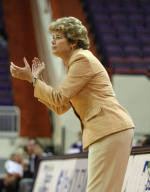 CLEMSON, SC – The 2008-09 Clemson women’s basketball schedule was announced on Tuesday by Head Coach Cristy McKinney. The Lady Tigers will travel to the state of Washington for the first time in history and will face eight teams that earned bids to the 2008 NCAA Tournament.

“We are exited to learn the schedule and to begin preparations,” McKinney said. “The conference portion of the schedule is always challenging, especially because of the quality of teams every year.”

Clemson will make the nearly 2,700-mile trek Seattle, WA over the Thanksgiving weekend for the Washington Husky Classic, but the remaining non-conference road games total less than 700 miles round-trip. The Lady Tigers will open the 2008-09 season against Furman on Nov. 14 in nearby Greenville before playing host to Presbyterian two days later in the first home game. They will then face in-state rival South Carolina in Columbia on Nov. 19, and return to Littlejohn Coliseum for games against Georgia State and Winthrop. The Georgia State contest, to be played on Nov. 25, will be the opening game in a double-header with the Clemson men’s basketball team.

The Lady Tigers will face Kent State in the opening round of the Washington Husky Classic on Nov. 28, with the championship and consolation games scheduled for Sunday, Nov. 30.

Clemson will then play host to Northwestern in the second annual ACC/Big Ten Challenge on Dec. 4, which will be just the second meeting in history between the Lady Tigers and Wildcats. The Ohio Bobcats and Chattanooga Lady Mocs will make the trip to Tigertown for non-conference match-ups in December, while Clemson will take on SEC foe Georgia at the Gwinnett Center on Dec. 22. That contest will pit current Clemson Assistant Coach Saudia Roundtree against her alma mater. Roundtree, a former point guard, was named the national Player-of-the-Year as a senior in 1996 after leading the Bulldogs to the national championship game that season.

The Lady Tigers will play host to Charlotte on Jan. 2 in the first of their 10 games that month, the most in a single month since the 1998-99 season. Clemson will open the conference schedule at Miami and will also face Florida State, Wake Forest and Boston College on the road in January. The ACC home opener will be on Jan. 8 against North Carolina, while Maryland, Virginia and Virginia Tech will also travel to Littlejohn Coliseum this season. The Lady Tigers will also mix in a non-conference game against Charleston Southern on Jan. 20.

Following the two straight home games against the Cavaliers and Hokies at the end of the month, Clemson will travel to Georgia Tech and non-conference opponent Western Carolina in the first week of February. The Lady Tigers will continue their home-and-home series with the Demon Deacons, Seminoles and Yellow Jackets as all three teams will play at Clemson in February. The month also includes a televised date at Duke on Feb. 13, one of three on the ACC’s regional network (Comcast Sports, Fox Sports South, Fox Sports Florida, and New England Sports Network) in 2008-09. The Lady Tigers’ games at Florida State (Jan. 11) and against Wake Forest (Feb. 8) will also be televised.

Clemson will then wrap up the regular season at NC State on Feb. 26. The 2009 ACC Tournament will be held from Mar. 5-8 at the Greensboro Coliseum in Greensboro, NC.