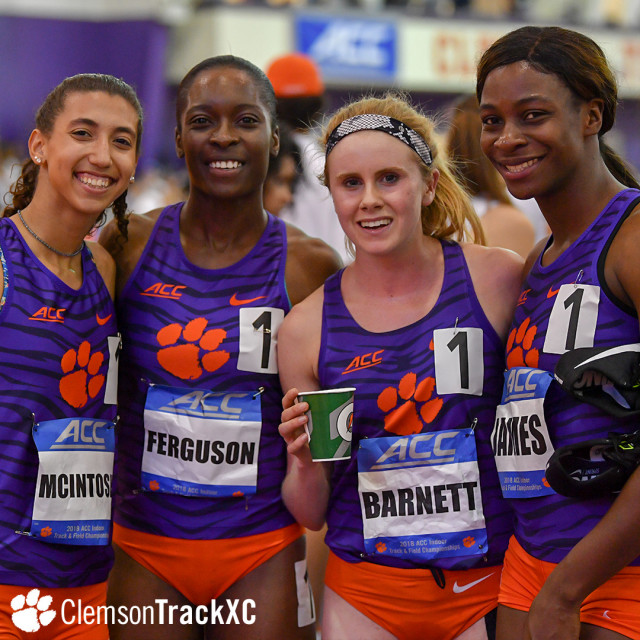 The foursome topped their previous 2018 best of 11:15.56, which they set Jan. 26 at the Bob Pollock Invitational. The Tiger women registered eight points in the event and currently sit in fourth place overall for the meet. Clemson trailed first-place finisher Virginia Tech by just one second as both teams topped the previous NCAA season-best time of 10:55.32, which was held by Boise State.

On the men’s side, John Lewis, Deonte Tolbert, Malik Epps and James Quattlebaum finished third in the DMR to round out Thursday’s action. They posted a season-best time of 9:41.02, just 0.17 seconds shy of the program record, to shatter the previous Clemson season-best by nearly 20 seconds. Their time also now ranks second all-time in Clemson history. With just one event scored on the men’s side Thursday, Clemson sits in third with six points behind the Hokies (10) and the Fighting Irish (8).

The Tigers return to the Clemson Indoor Track & Field Complex Friday with the resumption of the heptathlon. The women’s long jump will be the first event to feature a Clemson athlete and is slated for 1 p.m. On the track, the women’s 60m hurdle preliminaries are set to take place at 2 p.m., after the men’s unseeded 5000m, which is scheduled for 1:25 p.m.

ACC Network Extra picks up coverage Friday at 3:30 p.m., for the women’s 400m dash preliminary and concludes with with the men’ seeded 5000m run at 7 p.m. Friday’s ACC Network Extra broadcast as well as live results links can be accessed on clemsontigers.com.