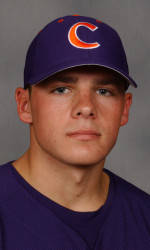 Wolfpack starter Clayton Shunick (5-2) earned the win, as he allowed just one unearned run on two hits in 5.0 innings pitched. Eryk McConnell pitched 2.0 scoreless innings of one-hit ball with two strikeouts to record his 11th save of the season.

The Tigers grabbed a 1-0 lead in the second inning. Taylor Harbin led off with a walk after being down in the count 0-2. After Harbin advanced to second base on a passed ball, he moved to third on Ben Paulsen’s groundout to first. Then with two outs, Addison Johnson blooped a single to right field to score Harbin.

The Wolfpack dented the scoreboard in the third inning with a run to tie the score. Tommy Foschi led off with a single through the right side and advanced to second on Drew Martin’s sacrifice bunt. After Caleb Mangum walked, Marcus Jones laced a two-out single through the left side to score Foschi. Ryan Pond’s walk loaded the bases, then Ryan Howard hit a shallow flyball to right-center. But centerfielder D.J. Mitchell made a running catch to save two runs.

N.C. State came right back and took the lead in the fourth inning with two runs. Jeremy Synan led off with a walk and Matt Payne lined a 1-2 pitch to left-center for a double to score Synan. Payne moved to third on a sacrifice bunt by Foschi. After Martin struck out for out #2, Payne scored on a wild pitch.

N.C. State added to its lead in the fifth inning with two runs to take a 5-1 lead. Jones led off with a walk, but was erased on a fielder’s choice by Pond. Pinch-hitter Pat Ferguson followed with a slow-rolling single through the right side, as Pond moved to third. After Synan struck out for out #2, Payne laced a 3-1 breaking ball to left field for a single to score Pond. Foschi then singled to right-center to score Ferguson.

Clemson cut the Wolfpack’s lead in half in the seventh inning with two runs. Johnson and J.D. Burgess hit one-out singles, and both advanced a base on Mitchell’s flyout to left. Then on a 3-2 pitch, Wilson Boyd lined a two-out single up the middle to score Johnson and Burgess.

But the Wolfpack responded with a run in the bottom of the seventh inning. Synan led off with a walk. After the next two batters were retired, Martin reached on an infield single. Zoltak walked Dallas Poulk to load the bases. Zoltak then walked Mangum to bring home Synan.

The Tigers cut N.C. State’s lead back to two runs in the eighth inning. Andy D’Alessio led off with a single to left field and moved to second on Harbin’s groundout. Hogan drove home D’Alessio with a hard-hit single through the right side. After Alex Burg’s groundout advanced Hogan to second base, Johnson hit a ball deep in the gap in right-center. But Jones made a running catch to end the inning and keep the Wolfpack ahead 6-4.

Another leadoff batter for the Wolfpack in Pond reached on a walk to lead off the eighth inning. It proved costly again for the Tigers, as N.C. State scored five runs in the frame to put the game out of reach. Pond was erased on a fielder’s choice by Ferguson. Pinch-hitter Ramon Corona followed with a walk, then pinch-hitter Vince Gutierrez singled up the middle to score Ferguson. Pinch-runner Wade Moore moved to third on the play, and Gutierrez advanced to second on Mitchell’s throw home. Foschi then reached on an infield single to score Moore. After pinch-hitter Joe Florio walked to load the bases and Poulk struck out looking for out #2, Mangum hit a three-run double to right field to up N.C. State’s lead to 11-4.

Foschi led the Wolfpack with three hits along with two RBIs and two runs scored. Mangum added two hits and four RBIs as well. N.C. State scored in five of the eight innings in which it batted. In all five of those innings, the leadoff batter reached base, including four times via a walk.

Johnson had a team-high two hits to lead the Tigers, who totaled eight hits on the night.

Clemson and N.C. State will play game-two of the three-game series on Friday at 7:00 PM.