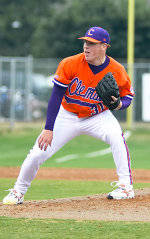 Clemson vs. Wofford Clemson (26-16) will play host to Wofford (14-29) Wednesday at Doug Kingsmore Stadium. First pitch is scheduled for 7:15 PM. The game will be broadcast live on the radio by WCCP (104.9 FM) out of Clemson. Live stats will be available online at ClemsonTigers.com as well.

The Series Clemson and Wofford have met 94 times on the diamond, with Clemson holding a 70-23-1 lead in the series dating back to 1898. The two teams have played at least one game every year since 2001, including three of the last four years at Doug Kingsmore Stadium. The two also met in 1999 at Clemson. Last year in a game at Wofford, the Tigers won 6-0. Prior to the 1999 game, the last meetings came in 1976 and 1977 at Spartanburg, both Tiger victories.

Clemson holds a 34-8 lead in the series in games played at Clemson, including a 4-0 advantage at Doug Kingsmore Stadium. Head Coach Jack Leggett is 5-0 against Wofford as Clemson’s head coach and was 7-2 against the Terriers as the Western Carolina head coach.

The Starting Pitchers Wofford will start senior lefthander Chris Clark (1-7, 10.38 ERA) on the mound Wednesday. The Knoxville, TN native has made 10 starts for a total of 39.0 innings pitched. He has allowed 68 hits and 20 walks while striking out 22.

Clemson will counter with freshman righty P.J. Zocchi (1-0, 0.00 ERA) Wednesday. The Bronx, NY native made his first appearance in over a year last Tuesday in a start against Western Carolina. He allowed no runs and one hit in 2.0 innings pitched to earn the win in a starting role.

The Terriers Wofford, led by sixth-year Head Coach Steve Traylor, enters Wednesday’s game with a 14-29 overall record and 4-17 mark in the Southern Conference after being swept by Furman over the weekend. The Phoenix is also 3-13 on the road this season.

The Tigers are hitting .306 as a team. The club has been especially effective with runners in scoring position, hitting .338 in that situation. Meanwhile, the pitching staff has allowed only 15 home runs while the offense has hit 48, meaning the team is hitting 3.2 long balls for every one it gives up.

Brad Chalk leads the club with a .375 batting average. Herman Demmink (.368) and Taylor Harbin (.349) are next among Tiger leaders in batting average. Harbin has hit 18 doubles, three triples, and nine homers along with a team-best 49 RBIs in 42 games. Kris Harvey is hitting .348 with an ACC-best 15 homers (including nine in ACC games) and 48 RBIs. Tyler Colvin is riding a 16-game hitting streak and is hitting .335 overall.

Tigers Outlast Elon 9-6 Tuesday Behind two-run homers by both Doug Kingsmore Stadium on April 26. Demmink’s shot in the sixth inning gave the Tigers the lead for good, while Harvey’s long ball gave Clemson much-needed insurance runs. Taylor Harbin added a two-run triple in the first inning after Elon took a 2-0 lead in the top of the first. David Kopp allowed just four hits with seven strikeouts in 6.0 innings pitched to earn the win, while Stephen Clyne picked up the save by pitching the final 3.0 innings. Clemson walked nine times, while Elon committed four errors.