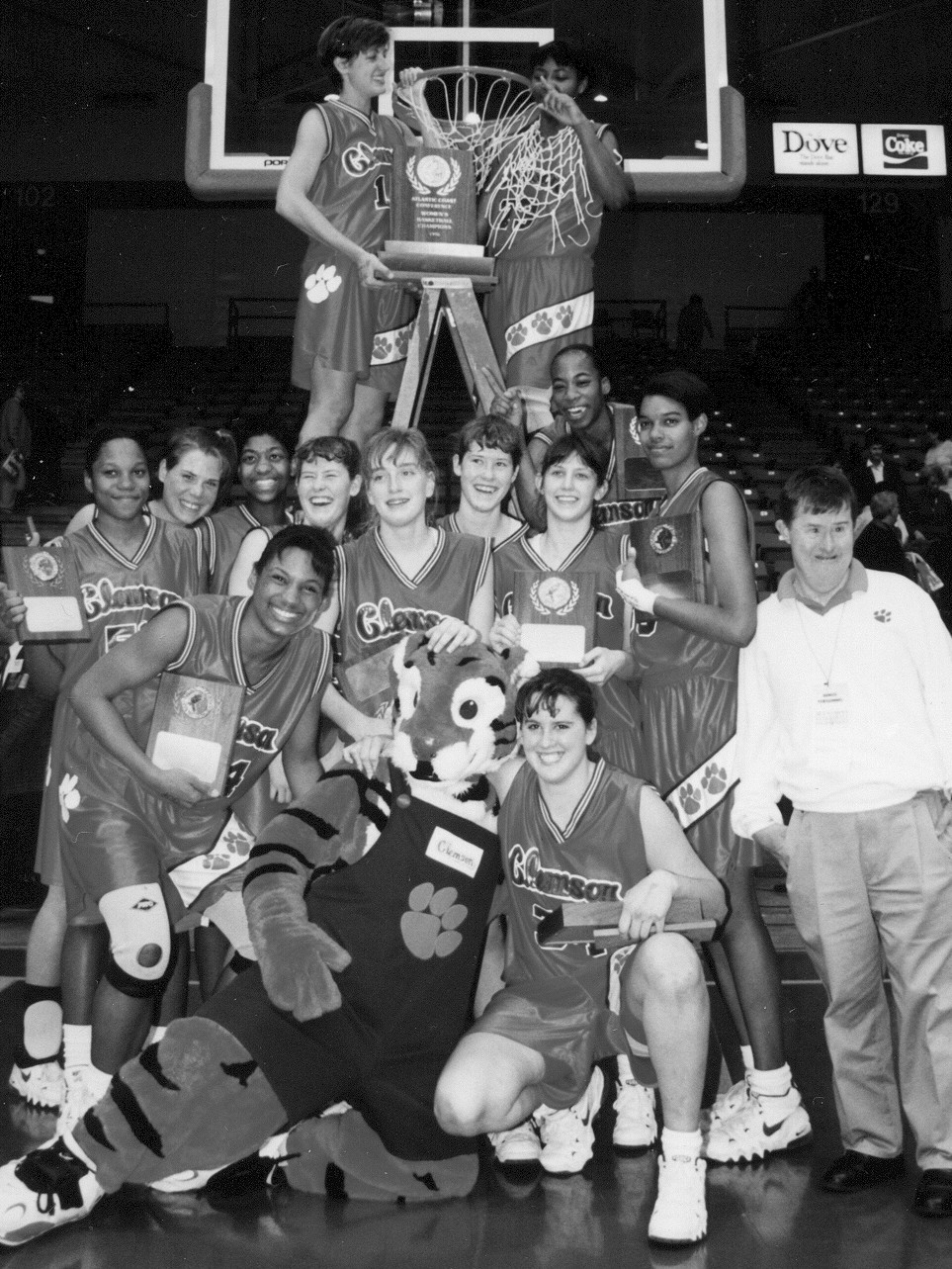 Clemson’s trip to winning the school’s first ACC Championship was nothing short of a magical one. The season began with five freshmen and eight returning letterwinners reporting for preseason practice.

The season began like any other year but it was soon evident that the 1995-96 team shared one key ingredient-chemistry.

In the first game of the season against UNC-Charlotte, the Lady Tigers were bound and determined they would not accept defeat. Clemson overcame a 12-point deficit in the last 1:35 in regulation to tie the score and claimed a 77-74 overtime win.

Clemson would win the next three games over Texas-Arlington, College of Charleston and Western Carolina.

In the Furman contest, Clemson set another precedent as Clemson won the battle of the boards by 28. Rebounding would be another key factor in Clemson’s unforgettable season.

The Lady Tigers set a school record for the school’s second longest win streak with 11 as the Lady Tigers defeated Florida State 87-74 in front of a ACC-TV audience on January 7th, at Tallahassee, FL.

Clemson lost its first game of the season with a 93-68 loss to North Carolina at Chapel Hill. Stephanie Ridgeway scored 25 points in the loss.

Clemson rebounded from the setback and defeated Wake Forest and N.C. State. In both of these games Clemson was led by freshman Amy Geren.

Coach Jim Davis won his 200th career game on the Division I Level with a 70-52 victory over Florida State in Clemson on February 3rd. Jeanette Davis led the way with 14 points.

The Lady Tigers defeated archrival South Carolina 75-57 at Clemson. Ridgeway scored 20 points and had a career-high 12 rebounds in the win.

Clemson split the next two games with Maryland in an unusual occurrence of playing the same opponent two games in a row. A snowstorm forced the schedule change.

Clemson lost the next three games to Duke, N.C. State and Georgia Tech, placing a cloud over Clemson’s chances in the ACC Tournament at the Winthrop Coliseum in Rock Hill, SC.

However, it must have been fate as the Lady Tigers gained renewed confidence and determination as the march to the championship began on March 1st. The Tigers entered the fray seeded fourth.

Clemson won the quarterfinal game over North Carolina in easy fashion, 67-49. Clemson shot .521 from the field in this game behind Jaci Stimson’s 16 points.

In the semifinal game, the third time must have been a charm as the Lady Tigers defeated eighth-ranked and top seed Virginia for the third time that season, 75-67 on March 2nd. The Lady Tigers used balance scoring as Laura Cottrell, Stephanie Ridgeway, and Amy Geren scored 14 points each.

Clemson also won the battle of the boards by 12 as Laura Cottrell pulled down 16 rebounds.

In the championship game Clemson started out of the blocks early and never trailed in the game as the Tigers defeated 12th-ranked Duke 71-54, on March 3rd. Amy Geren led the way with 12 points, while Laura Cottrell had 12 rebounds. This was the school’s first ever ACC Tournament Championship in the sport of basketball.

Laura Cottrell had 12 rebounds and was named the Tournament’s MVP. Four Clemson players were named to the ACC All-Tournament team. Cottrell was a unanimous first-team selection. Stephanie Ridgeway was also a first-team pick. Amy Geren and Jaci Stimson were second-team honorees.

The 23 wins tied the school record for the second most wins in a season by a Clemson team.

Ridgeway concluded her career by being named District III All-American as announced by the Women’s Basketball Coaches Association (WBCA) in cooperation with the Eastman Kodak Company.

Also in 1996, Ridgway was named first-team All-ACC. She led the team in scoring with a 15.3 ppg. average. Laura Cottrell led the team in rebounding with an 8.7 rpg. mark. Freshman ltoro Umoh was the team leader in steals (59) and assists (65). Clemson’s Amy Geren was also named to the Atlantic Coast Conference’s All-Freshman team.

Although the “Cinderella Story” came to an end for the Lady Tigers, the memories of that magical season will never be forgotten.