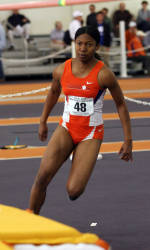 Travis Swaggard finished fifth overall in the 400m dash. The junior from Lorton, VA posted a personal best time of 48.31 in the opening heat and his time stood through seven subsequent prelims.

Joanie Castagno was seventh overall in the women’s mile on Saturday. The sophomore from Delaware posted a time of 5:05.57. Lilla Fördós finished 11th in the event after crossing the finish line in 5:17.38. Jonathan Sunde was the men’s leader in the 3000m for the Tigers, posting a time of 8:40.13.

Wilson cleared 5’10” on her second attempt Saturday morning, which matched the school record set just one week ago by sophomore April Sinkler. It was a personal best, regardless of season, for Wilson, a junior from Conway, SC. In the men’s high jump, Miller Moss cleared 6’2.75″ and tied for ninth.

Sinkler had another outstanding weekend, as she finished runner-up in the long jump in the afternoon. She improved on her personal best with an NCAA provisional qualifying leap of 20’5″. Liane Weber was fifth, as she posted a jump of 19’3.25″.

In the men’s long jump, George Fields had an NCAA provisional qualifying effort with a mark of 24’7.25″. He finished in third place. Miller Moss was ninth in the event after hitting a 23’0″ leap, which ranks as a personal best for the red-shirt sophomore out of Sumter, SC.

In the unseeded women’s vault, Amy Morrison set a personal best with a 12’0″ clearance. Her previous best was 11’11.75″ last season. The vault Saturday was good enough for a fifth-place finish and sixth-place spot on the Clemson all-time performance list in the event. Emily Barlage (11’6.25″) was ninth Saturday in the pole vault and also improved on her best mark from the Clemson Invitational.

Both teams return to action on the weekend of January 30-31 for the Clemson Games and JRF Multi-Challenge.