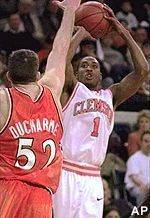 Former Clemson basketball standout Will Solomon signed a free agent contract with the NBA’s Toronto Raptors, the team announced Monday. Terms of the deal were not disclosed. Solomon, who has played overseas since 2002, was a standout guard for Clemson from 1998-2001.

He played in 2002-03 with Aris Thessaloniki in Greece. In 2003-04, he played for Hapoel Jerusalem in Israel. Solomon played in Turkey in 2004-05, before returning to Israel to play for Maccabi Tel Aviv in 2005-06. While at his last stint in Israel, Solomon played alongside current Raptor player Anthony Parker.

Solomon was a first-team All-ACC selection as a sophomore in 1999-2000, the last Clemson player to earn the honor. As a senior, he was second-team All-ACC. He led the ACC in scoring at 20.9 points per game his sophomore season, and was fourth in the league as a senior at 19.7 per contest.

Solomon finished his career with 1,431 points in three seasons, a figure that ranks 11th among Clemson’s all-time scoring leaders. He ranks third in school history in three-point goals with 214, which included back-to-back seasons of at least 90 made from beyond the arc.

He turned pro after his junior season at Clemson and was a second-round choice (#33 overall) of the Memphis Grizzlies. Solomon spent the 2001-02 season in the NBA and averaged 5.2 points per game in 62 appearances with the Grizzlies.