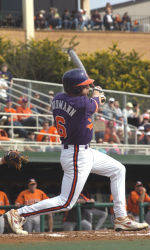 Widmann Out Indefinitely Due to Neck Injury

Starting shortstop Stan Widmann (Hurst, TX) is out indefinitely due to a neck injury. He will have tests in the coming days to determine the extent of the problem. The junior was hitting .409 in the Tigers’ first six games of the season. He has one home run and six RBIs along with a perfect 1.000 fielding percentage in 25 chances in the field.

The 2007 season has marked his third straight year as Clemson’s starting shortstop. He hit .307 in 67 games as a sophomore on Clemson’s 2006 ACC Championship and College World Series team. He was also the Tigers’ leading hitter for the eight NCAA Tournament games last year with a .387 batting average.