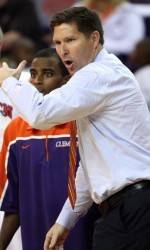 Welcome to Paradise: Clemson in the Virgin Islands – Wednesday

The Clemson basketball team boarded its 10:00 AM flight in Atlanta for St. Thomas, Virgin Islands on Wednesday. The Tigers were not the only team on this particular Delta flight. Head Coach Fran McCaffery and the Iowa Hawkeyes were also on board. Iowa is on the other side of the bracket from Clemson and will face Alabama in the first round Friday.

The plane touched down approximately 2:30 PM Atlantic time. From there, the team got its luggage and began the one-hour trek through traffic to the Antilles School, Clemson’s practice site for the week.

Head Coach Brad Brownell took his team through an hour and a half of practice, its first since claiming a 78-70 victory over defending SoCon champion Wofford on Monday. A large portion of practice consisted of continuing to teach his team the keys to playing a motion offense. The Tigers have done pretty well offensively in their first two games, shooting 52 percent or better in both victories.

Fox color analyst Larry Conley took in practice on Wednesday. A veteran of over 30 years in the broadcasting industry, Conley is enjoying his seventh trip to St. Thomas to cover the Paradise Jam.

Speaking of the tournament, this will be Clemson’s second appearance in the Paradise Jam. The Tigers competed in the championship game of the inaugural event in 2001. Chris Hobbs and Jamar McKnight scored 19 points apiece, but Clemson fell by a score of 67-65 to then-Big East foe Miami (FL).

Clemson has certainly had its share of success in recent regular season tournaments. The 2005-06 team won the San Juan Shootout after defeating Akron in the championship game. That broke a nearly 25-year drought in eight-team tournaments. The Tigers followed with a 2006 win in the four-team Cox Classic at Old Dominion. Clemson defeated the host Monarchs 74-70 in the final game. The two teams are on the same side of the bracket this week. In 2008, Clemson defeated Hofstra, TCU and Temple on its way to claiming the Charleston Classic.

In 2009, Clemson’s most recent regular season tournament, the Tigers knocked off No. 10 and eventual NCAA finalist Butler. Several players on this year’s team played integral roles in that win. Andre Young hit four big three-point goals, while Demontez Stitt scored a team-high 19 points. Included in his point total was a pair of free throws that gave Clemson the lead in the final three seconds. Current Washington Wizards forward Trevor Booker preserved the win on the ensuing inbounds play as he blocked a three-point shot.

This will be Brownell’s first appearance in the Paradise Jam, but he is certainly no stranger to tournament success in his eight seasons as a head coach. He won two conference tournaments (2003, 2006) and the 2005 BCA Invitational as the head coach at UNC Wilmington. Then, at Wright State, he led the Raiders to the 2007 Horizon League Tournament crown and the 2008 San Juan Shootout championship as well. In total, Brownell’s UNC Wilmington and Wright State clubs compiled a 12-2 record in regular season four- and eight-team tournaments. His teams were even more impressive in the postseason conference tournaments, compiling a 15-5 record.

Associate Head Coach Rick Ray is making a return trip to the Virgin Islands. Last year, as an assistant coach at Purdue, he helped the Boilermakers to the team championship after defeating a highly-ranked and talented Tennessee squad.

Be sure to check back with ClemsonTigers.com on Thursday, as we look into the Tigers’ matchup with Long Beach State. Ironically, this is the second straight year the two schools will meet in a regular season tournament. We will also provide highlights from the team’s first full day in St. Thomas, which will include a gondola trip to Paradise Point for a welcome reception.