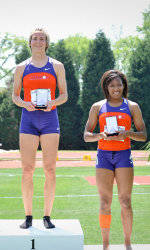 CLEMSON, SC – Liane Weber and Patricia Mamona from the Clemson women’s track & field program were both named to the ESPN the Magazine Academic All-America teams, released Thursday by the College Sports Information Directors of America (CoSIDA). Weber was named to the first team, while Mamona was a third-team selection.

With their selections, Weber and Mamona became the fourth and fifth student-athletes in Clemson women’s track & field history to be named Academic All-Americans. Tina Krebs (1986) was the first Tiger female to earn the honor. Gisele Oliveira was a two-time Academic All-American (2004-05), while Jenny Barton was the program’s most recent honoree in 2006 as a third-team selection.

In fact, Weber and Mamona are the first Academic All-Americans in any sport at Clemson since 2006 when Barton was honored from the women’s team and Danny Alge was a second-team selection from the men’s track & field squad.

Weber’s honor puts a close on a brilliant all-around season for the native of Wangen, Germany. She was an indoor USTFCCCA All-American after a fifth-place finish at the NCAA Championships in the pentathlon. She won ACC individual championships in the pentathlon and heptathlon, setting conference records in both competitions. She qualified for the NCAA Outdoor Championships, but was unable to complete the heptathlon due to an injured foot tendon. Weber sports a 3.78 cumulative GPA in health science.

Mamona is fresh off a national championship performance in the triple jump at the NCAA Outdoor Championships. The native of Lisbon, Portugal was the eighth event champion in Clemson women’s track & field history after establishing a school record with a leap of 45’11.75″. She was also the indoor national runner-up in the event. Mamona was All-ACC in 2010 in the indoor and outdoor triple jump, as well as the heptathlon. She has a 3.47 GPA in health science.