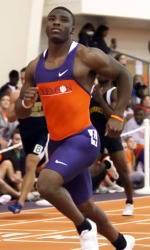 College Station, TX – Clemson junior Liane Weber earned her first-ever All-America honor Friday after finishing sixth in the pentathlon at the NCAA Indoor Championships. She, along with Jacoby Ford, highlighted day one at the national meet for the Tiger track & field program. Ford advanced to Saturday’s final in the 60m dash after matching the NCAA meet record with a time of 6.51 in the preliminary round.

“We’re pretty happy with our performances today,” said Lawrence Johnson, Clemson’s Director of Track & Field. “We had to pull April (Sinkler) due to an ankle injury. But Liane had personal bests in four of the five events in the pentathlon. We were pleased with that. Jacoby looked great out there today, he’s ready to go. Hopefully we can bring home a national champion tomorrow.”

Sinkler had been slated to compete in at least the long jump and high jump. She was recently named the ACC’s Most Valuable Field Event Athlete, but suffered an ankle injury in practice earlier this week. Coaches were hopeful to have her compete, but increased swelling led to the decision to pull her from the events.

Weber became the first female in Clemson history to earn All-America status in the multi-events. She also established an ACC record in the pentathlon. Weber finished with 4,235 points, which broke the previous conference record of 4,224 set by Saskia Triesscheijn of Virginia Tech in 2006. Ironically, both athletes were coached by Lawrence Johnson.

Weber got off to a good start in the 60m hurdles, posting a personal best 8.66 in the event. Patricia Mamona was actually two hundredths of a second better than Weber in the hurdles. Weber then cleared 5’7.75″ in the high jump, which matched a personal best. She followed with a career effort in the long jump, hitting a mark of 19’8.75″. The big boost for the native of Germany came in the fifth and final event, the 800m run. She was second among all contenders in the race with a time of 2:14.04.

Mamona dropped out in the final event in order to stay fresh for Saturday’s triple jump. She is scheduled to compete in that event at 3:30 PM (Central time) Saturday at Gilliam Indoor Stadium.

Ford’s time was fastest among the field on Friday, as he easily won heat #2 of the 60m dash. The Royal Palm Beach, FL native tied Richard Thompson of LSU for the best time ever at the NCAA Indoor Championships. Thompson, NCAA champion last season, ran a 6.51 in both rounds at the 2008 meet. Ford will compete in his second final in as many tries in the event at the NCAA Indoor Championships. He placed third in the 60m at the 2007 meet, when teammate Travis Padgett won the event.

The finals of the 60m dash will be held at 6:10 PM (Central). Fans can follow the action live via the internet at ESPN360.com.