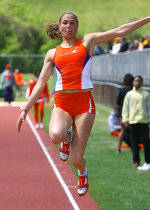 Sacramento, CA – Liane Weber completed the first day of the heptathlon on Thursday at the NCAA Outdoor Track & Field Championships. She ranks 22nd after four events with 3,072 points in the meet held at the Alex G. Spanos Sports Complex.

Weber is competing in her second NCAA national meet, as she also qualified for the indoor pentathlon in March. She was the only freshman to compete in the pentathlon and is one of three to compete in this week’s heptathlon. Weber posted a time of 14.59 in the 100m hurdles to open Thursday’s action. She followed with a solid effort of 36’11” in the shot put. She was 17th out of 26 competitors in that event. She ended her afternoon with a time of 25.66 in the 200m dash. She will conclude with the long jump, javelin throw, and 800m Friday beginning at 11:30 AM (PT).

Patricia Mamona will compete in the triple jump prelims at 3:15 PM Friday. Should she advance to the final, it will take place Saturday at 10:00 AM.