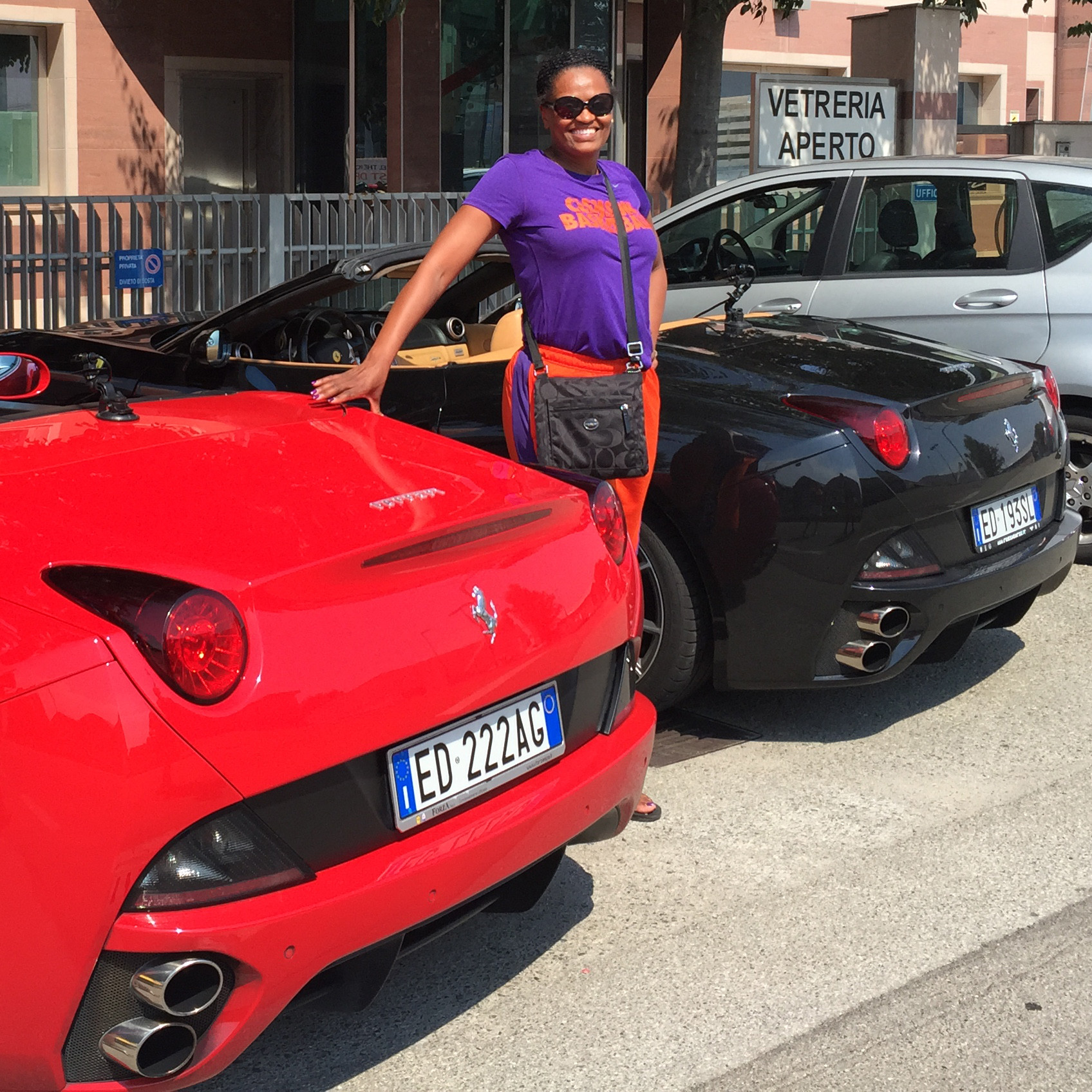 On the fifth day of our Italy adventure, we traveled from Vicenza to San Marino. It was a four-hour bus ride between the two locales, but we broke up the trip with a stop halfway, at the Ferrari Museum in Maranello. After touring the museum and hearing about the history of Ferrari, we moved on to the garage, where several members of our group signed up to go for a test drive!

The drivers in our group were: Head Coach Audra Smith, Assistant Coach Marc Wilson, Video Coordinator Darian Riley, Sport Supervisor/SWA Natalie Honnen, Dr. Tenley Murphy, Pete Becker (the husband of Director of Ops Kathy Becker) and freshman Gadson Lefft. Everyone who went for a test drive returned with a huge grin on his or her face, letting us know that the experience was worth every penny (or in this case, worth every euro).

Coach Smith’s daughter Adria was a passenger in the back seat of her car (a museum/garage staff member had to sit in the front seat next to the drive), and when they came back, Coach’s first words were “I want a sports car!”

One of the coolest things about the test drive experience was that the Ferrari staff used a drone to follow along and record the entire ride on video. (The drivers had the option to purchase the video afterwards.) The drone operator stayed at the garage, and as the cars pulled out of the parking lot and drove up and down the streets, he flew the drone along right behind the cars, watching on an iPad the entire time. It was a different use for a drone than what we’re used to seeing on the Clemson Football Practice Fields!

After we left Maranello, everyone was ready for lunch, so we stopped at the first Autogrill we saw off the highway. Autogrills are very popular in Italy. They are like glorified rest areas that consist of food courts, grocery stores, drug stores, ATMs, among other things.

Our next stop was San Marino, our destination for the next two nights. San Marino is not a part of Italy; it’s actually its own separate republic, similar to Vatican City. In fact, it claims to be the oldest surviving independent republic. This fact caused a bit of a stir with some members of our group who discovered upon arrival that their cellular service no longer worked once we left Italy. Luckily for the group, our hotel, the Grand Hotel San Marino, had the best wi-fi service we’ve encountered so far on our trip.

It was “dress up” night for our team dinner, and everyone was enthusiastic. The players obviously spend a lot of time wearing athletic gear, so they are always very excited when they have the chance to get dressed up. Needless to say, there were quite a few selfies taken during our walk to and from the restaurant. And San Marino was a great for it, because it has the most picturesque scenery we’ve seen on our trip. (We feel like we’ve been saying that about every new place we visit, but it’s true!)

After dinner, we had a little time to walk around the city and sightsee on our own before heading back to the hotel to get a good night’s sleep for Monday, and our third and final game of the trip.