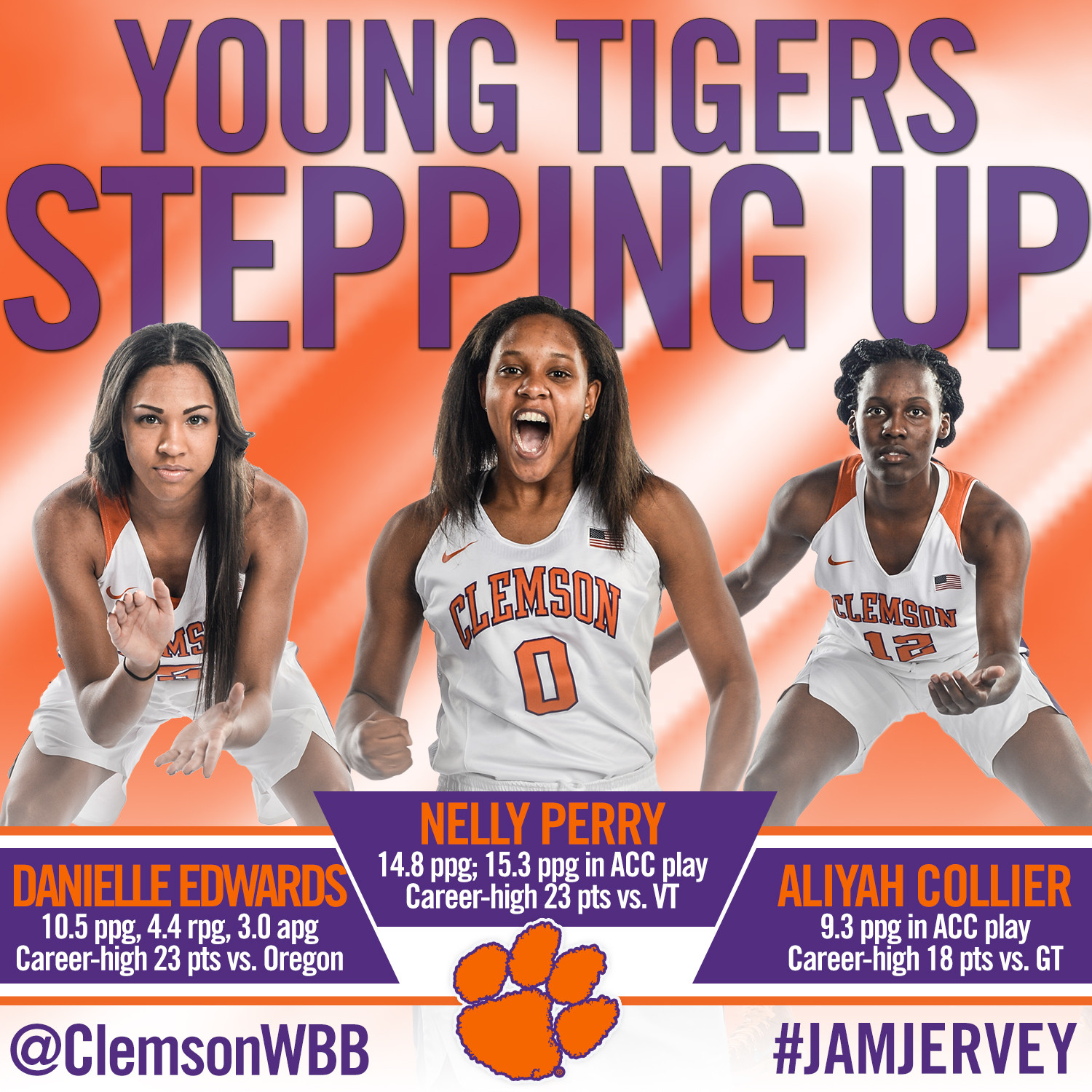 Nelly Perry is called on to do a lot these days for the Clemson women’s basketball team. Perry, a native of Camden, N.J., only stepped on campus a year and a half ago, and now she is the focal point of the Lady Tiger offense. The pressure can become immense for a team’s go-to player, especially if that player is still a teenager and has yet to celebrate her 20th birthday. However, Perry has embraced her new role as the offensive leader of a team that only has one upperclassman on the roster.

Last season as a freshman, Perry averaged 6.7 points per game for a team that was led by two senior perimeter players, high-scoring wing Nikki Dixon and experienced point guard Chelsea Lindsay. Perry started 23 games as a freshman and averaged 24.5 minutes per game, seeing more playing time than most rookies around the country. Despite the experience she gained as a freshman, she was just that, a freshman, and was not called on to score in double-figures every night.

Now, a year later, things certainly have changed in terms of Perry’s role on the team. After losing Dixon and Lindsay to graduation, Perry has been called upon by Head Coach Audra Smith and the Lady Tiger coaching staff to lead the young roster, specifically on the offensive end of the court. Last summer, the coaches began to emphasize to Perry how her role was going undergo a major makeover.

“The biggest thing we talked about with Nelly this summer was that her role was going to change form a year ago. Last year, Nelly took a back seat because there were other more experienced kids on the perimeter,” Associate Head Coach and guards coach Daryl Oliver said. “Over the last three to four months, it’s really started to click for her and now she’s really starting to turn the corner.”

This season, Perry has certainly answered her coaches’ calls, increasing her scoring average from 6.7 points per game as a freshman to 14.8 as a sophomore. Her 8.1 points per game increase is one of the largest increases in scoring average by a sophomore in the ACC this season. Perry has scored in double-figures fourteen times and has eclipsed the 20-point mark in three games this season.

“It’s hard to be the number one option on offense for any kid no matter their class. For Nelly, it’s happened so early in her career that she’s able to learn from her mistakes,” Oliver emphasized. “We constantly remind her it’s a process, but it’s something she can do. If we didn’t believe she could be that type of player then we wouldn’t put her in this position.”

Perry has embraced the process, increasing her production even as the season progresses. In ACC play, Perry in averaging 15.3 points per game, highlighted by a 23-point effort at Virginia Tech and a 22-point output vs. Georgia Tech. The sophomore ranks eighth in the ACC in scoring. Even with the impressive numbers Perry is putting up this season, her coaches believe she can and will continue to get even better.

Throughout the season, Perry has received help primarily from two freshman teammates who have defied their rookie status and produced at a high rate for the Clemson women’s basketball team this season.

“I can’t ask for anything more from a freshman point guard giving you two double-doubles in two consecutive games. Danielle is a fighter and a competitor.”

Edwards also poured in a career-high 23 points at Oregon on November 24th. Edwards is averaging 9.5 points per game, 4.4 rebounds per game and 3.0 assists per game as a freshman for the Lady Tigers. She ranks in the top-10 in the ACC in steals per game, minutes per game and free throw percentage.

As of late, a freshman wing from Augusta, Ga., Aliyah Collier, has come on strong for Coach Audra Smith and the Lady Tigers. Collier is the team’s second leading scorer in ACC play, averaging 9.3 points per game through the first eight conference games of her career.

“I think Aliyah Collier will be a pleasant surprise in the ACC. She’s from Augusta, Ga. and attended the same high school as one of Clemson’s most prestigious players in Rod Hall. She’s a superior athlete and is great at attacking the basket with her left hand.”

Collier, a 5’10” wing, is the team’s leading rebounder on the season, averaging 5.1 rebounds per game and 5.6 per game in conference play. Collier’s career in the orange and purple started off a little slow, as she adjusted to the speed of the college game.

“Aliyah was pretty much close to a triple-double every night in high school. It took us some time to figure out what role to put her in this season,” Oliver explained. “We settled on using her as a hybrid, kind of a post and guard. Assistant Coach Margaret Richards has done a great job with her in helping her understand her limits as she learns the game.”

Coaches always want to see their freshman improve and that’s exactly what Collier has done so far this season. Each month of the 2015-16 campaign, Collier’s offensive production has reached a new level. In November, she averaged 2.9 points per game and in December her scoring average increased to 4.7 points per game. In January, Collier is now averaging 9.3 points per game.

As the young Lady Tigers grow and improve, so will the team as a whole. The maturation of a young team is a process, but one that both the players and the coaches are wholeheartedly embracing.

“You have to remember they’re young but you have to trust the process and enjoy it. Once we get the base in place and get it going, it’s going to be fun to watch.”