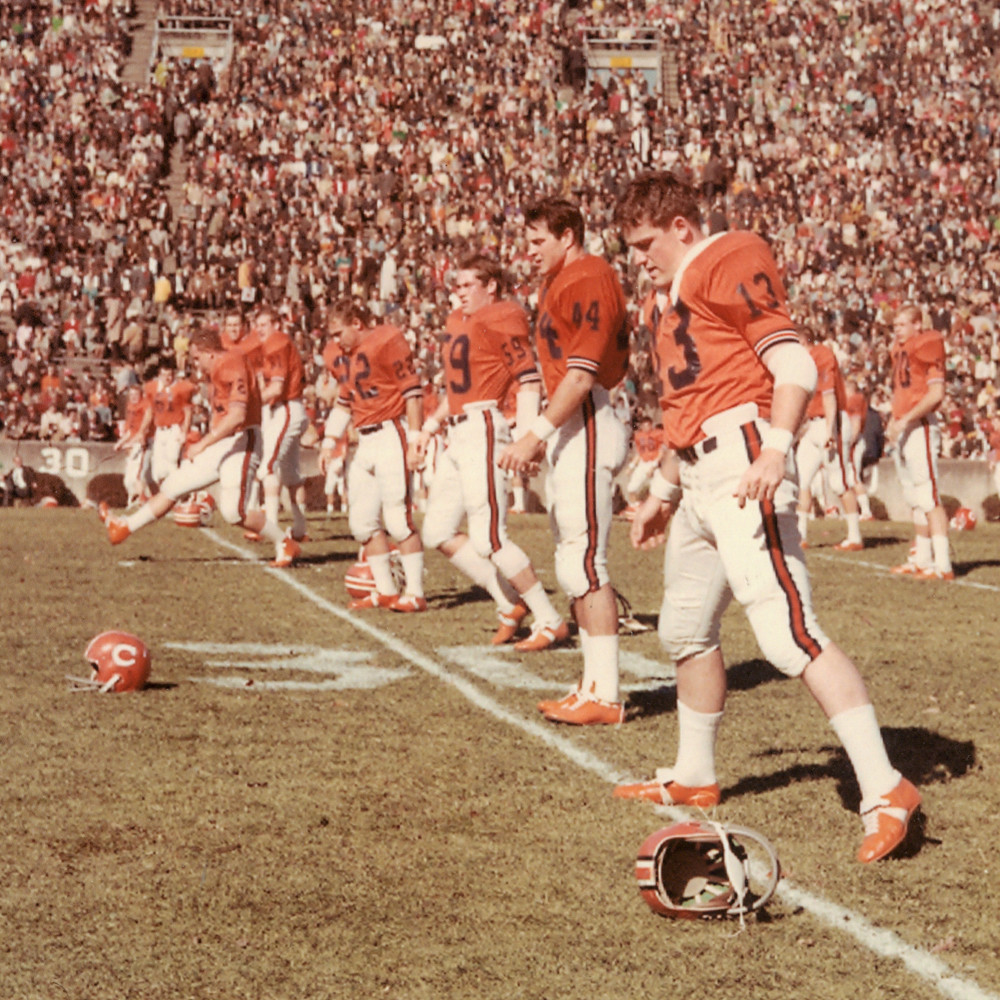 By Sam BlackmanOn November 18, 1967, it probably was the shoes that enabled Clemson to upset 10th-ranked N.C. State, 14-6 in Clemson’s first ever win over a top-10 team in Death Valley.Coming into this Atlantic Coast Conference classic, the Wolfpack was enjoying a fabulous year, defeating their first eight opponents. After defeating Virginia in Charlottesville in the eighth game only two opponents remained, Penn State and Clemson, both on the road.Before the Nittany Lions game, there was talk that N.C. State had the Sugar Bowl bid wrapped up provided there was at least a split in the last two games. The Wolfpack lost to Penn State, 13-8, making the Clemson-NC. State game even more crucial for the Wolfpack’s New Year’s Day bowl hopes.

The Wolfpack had become nationally famous in 1967, because of their tenacity and their distinctive white shoes. At this time, every team in the nation, along with N.C. State’s offensive unit, was wearing black shoes.N.C. State started wearing the white shoes on defense when left cornerback Bill Morrow noticed a member of the Kansas City Chiefs wearing white shoes.Morrow, who scored the first touchdown for N.C. State in the new Carter-Finley Stadium when he intercepted a pass in 1966, went to co-captain Art McMahon with the idea. Linebacker and later head coach of the Wolfpack (2000-06), Chuck Amato said he would paint his shoes white and the idea spread throughout the Wolfpack defense. State was ranked number-one in the ACC in defense coming into the Clemson game and was a sure bet to beat a 4-4 Clemson team.In the week before the game, a few of the Clemson players wanted to paint their shoes orange to counteract the perceived intangible advantage of N.C. State’s white shoes.“I remember a lot of players got together and we decided to paint our shoes orange,” recalled former Clemson tailback Buddy Gore.“Our trainer Herman McGee rounded up the orange paint needed for our idea and we went to the dorm that week and painted our game shoes orange,” said Gore. “I have no idea where he got the orange paint. Coach Howard did not know what we were doing until that Saturday morning. I think he liked our plan.”Gore was one of Clemson’s greatest backs ever and in 1967, he was named the Atlantic Coast Conference’s Player-of-the-Year.Assistant Coach Don Wade was also involved in the scheme. “We got the paint from eight or nine different places. It was tough to find orange paint that would be suitable for shoes.”N. C. State jumped ahead 6-0 as Gerald Warren hit two second-quarter field goals from 37 and 47 yards out with his back to a gusty 22 mph wind.Gore scored what proved to be the winning touchdown for the Tigers early in the third quarter. With a third-and-11 situation facing the Tigers on N.C. State’s 27, Clemson was obviously facing a throwing situation.“N.C. State was in a defense that would provide double coverage on the wideouts and forced the linebackers to cover the man coming out of the backfield,” remembers Gore.“I was not the primary receiver by any means,” Gore continued. “After all, I only caught seven passes my entire career. I was in the flats around the 12-yard line and I was open after beating the linebacker, Chuck Amato. The cornerback and the safety were with our wide receivers. I will never forget when I was open in the flats. I looked at our quarterback Jimmy Addison and he stared right back at me and he threw me the ball and I went in for the touchdown.”Ironically, Dennis Byrd, N.C State’s All-American defensive tackle wrote Gore a letter that gave him extra incentive to do well.“Before the game Byrd wrote me a letter that said I wouldn’t score,” Gore said.   Everytime he tackled me during the game, he would say, ‘Gore you stink’.“After I caught that touchdown pass I was coming out of the end zone and he was standing right there.   I remember it like it was yesterday.  I asked him, ‘How do I smell now?”The touchdown occurred when Clemson’s Phil Rogers went to the post and took the corner back with him.  Gore and his 4.5 forty yard dash speed, had Amato covering him and he had him beat by several steps.“I went into the flat and turned up the sideline,” he recalled.  “The next thing I knew the ball was coming toward me.”   After the Tigers scored, N.C. State was forced to punt. The Tigers took the ball and marched 43 yards for a touchdown.  Rogers caught a 27-yard pass from Addison to set up the Tigers’ second touchdown.  Jacky Jackson scored from seven yards out around right end with 7:45 left in the third quarter.   N.C. State drove to the Clemson 29-yard line with three minutes left to go in the game but quarterback Jim Donnan’s pass intended for right end Harry Martell was intercepted by Richie Luzzi in the end zone.   Donnan would later become head coach at Marshall in 1990-95 and Georgia in 1996-2000.  He also played for the Wolfpack tennis team.  Clemson went on to win the game 14-6 ensuring the Tigers at least a tie for the ACC crown. The Tigers defeated South Carolina the next Saturday 23-12, to clinch the championship outright and finish with a 6-0 mark in the ACC.  N.C. State went on to defeat Georgia 14-7 in the Liberty Bowl.“How many tackles did those orange shoes make, coach?” a sportswriter asked Clemson Head Coach Frank Howard after the game. “None” Howard replied in a word. “But I tell you, there is something about football that makes boys believe in something that will help them. When they believe they can do something they usually do it.”“I will never forget when we ran down the hill and when the fans saw us in those orange shoes there was silence for about three or four seconds, and then you heard the loudest roar when they realized we were all wearing orange shoes,” said Gore.  When I go back to Clemson, and I see the Tigers run down the hill, I think about that loud roar we received quite often.” On that particular day, it must have been the shoes!