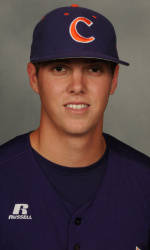 All nine Demon Deacon starters had at least one hit and freshman lefthander Tim Cooney tossed 8.0 strong innings to lead Wake Forest to an 11-2 win over #22 Clemson in front of 802 fans at Wake Forest Baseball Park on Sunday afternoon. The Demon Deacons, who won the series 2-1, improved to 15-36 overall and 6-21 in the ACC. The Tigers fell to 33-19 overall and 15-12 in ACC play.

Tiger starter Dominic Leone (2-1) suffered the loss, as he yielded four hits, five runs (one earned), and two walks with one strikeout in 1.2 innings pitched.

The Demon Deacons took the game’s first lead in the first inning after the first two batters of the frame were retired. Steven Brooks bounced a two-out single up the middle, Mike Murray walked, and Matt Conway lined a single to right field to score Brooks. It also extended Conway’s hitting streak to 14 games.

Wake Forest added four unearned runs to its lead in the second inning with the help of a costly Tiger error. Trenton Langston hit a one-out single down the left-field line and Mark Rhine hit a potential inning-ending double-play grounder, but second-baseman Mike Freeman booted the ball. After Pat Blair loaded the bases with a walk and Ryan Semeniuk popped up, Brooks laced a two-out single to center to score Langston and Rhine. Murray was hit-by-pitch to load the bases again, then Conway walked to bring home Blair and Brooks scored on a wild pitch.

The Tigers responded with a run in the top of the third inning. Will Lamb hit a one-out triple to right-center and scored on Freeman’s sacrifice fly to left field. The three-bagger extended Lamb’s hitting streak to 10 games.

In the bottom of the third inning, Langston led off with a walk but was erased at second on Rhine’s bunt back to the mound. Blair followed with a sharp single to left field. Semeniuk grounded a ball to where third-baseman John Hinson was originally playing, but since both runners were moving on the pitch and Hinson was moving towards third base, the ball went through the vacated spot for a single to score Rhine.

Mac Williamson hit a one-out infield single in the fourth inning, stole second, and scored on Carlos Lopez’s two-run homer to left field, his sixth long ball of the year.

Jeff Schaus hit the first pitch of the sixth inning over the fence down the right-field line, his 12th long ball of the season.

In the seventh inning, Langston led off with a walk and Rhine reached on a bunt single. After Blair’s sacrifice bunt moved the runners up a base, Semeniuk bounced a 1-2 pitch up the middle for a single to plate Langston and Rhine.

Wake Forest added to its lead in the eighth inning. Conway led off with a single to right-center. Three batters later, Langston hit a two-out single to left field on a 3-0 pitch. Rhine followed with a double down the left-field line to score Conway.

Brad Miller had two hits to lead the Tigers, who suffered their worst loss to the Demon Deacons since a 12-3 defeat in 2001.

With Virginia’s comeback win over North Carolina on Sunday, the Tigers clinched a spot in the ACC Tournament at Greensboro, NC.

Clemson will host Presbyterian on Tuesday at 6:30 PM.