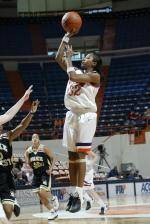 WINSTON-SALEM, NC-Erin Ferrell came off the bench and scored 15 points in leading Wake Forest to a 66-55 win over Clemson in an Atlantic Coast Conference women’s basketball game at Winston-Salem, NC Thursday night. Ferrell was 5-7 from the field and 5-6 from the free throw line. She also finished with five rebounds.

Clemson was led in scoring by Chrissy Floyd with 16 points. Floyd was 7-13 from the field and 2-6 from the three-point line. Floyd also had eight rebounds, three assists and two steals in 38 minutes of play. Wake Forest won the battle of the boards 43-35. Eafton Hill led the Deacons with eight rebounds. Clemson was led in rebounding by Lakeia Stokes with nine.

“I give credit to Wake Forest,” said Clemson Head Coach Jim Davis. “They played with more energy and were the better basketball team tonight. We struggled to score if Chrissy was not in the game. We did not have people step up their game offensively. We need for people to step up their games at this time of year. Wake Forest was changing defenses and this kept us off balance. We had some open shots on the elbow but could not knock down our shots. At the end we increased our defensive pressure and got back in the game.”

“We had a great team effort,” said Wake Forest Head Coach Charlene Curtis. “We got off to a good start with our seniors. We did what we wanted to do defensively and this was a big key tonight.”

Clemson will play at Florida State on Sunday, March 2, at 1:00 p.m. in the Lady Tigers last regular season game.