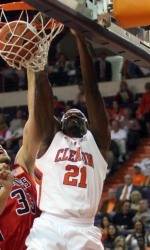 Round Two Voting Open Now Until Feb. 20 at: Facebook.com/collegeslam

CHICAGO, IL – Clemson’s senior forward Bryan Narcisse won his round one match in the “Dark Horse Dunker” competition and is in round two, Intersport announced today. “Dark Horse Dunker” nominees are under-the-radar players who have what it takes to compete against the D-I field in New Orleans. The winner will participate in the Denny’s Slam Dunk Competition at the State Farm College Slam Dunk & 3-Point Championships in New Orleans March 29 on ESPN. Sixteen dunkers have been selected to compete in the “Dark Horse Dunker” Facebook bracket which is a four-week knockout competition. Fans will determine the winner by voting during each round at the official Facebook page (Facebook.com/collegeslam).

Don’t be fooled by the eyewear, Narcisse is more Superman than Clark Kent. In his video submission, the big man takes off from the free throw line and clears three brave teammates lying in the paint – unbelievable. Narcisse won the fan voting over Charleston Southern’s Kelvin Martin in round one and will face Campbell’s Eric Griffin in round two. To watch Narcisse and Griffin in action and to vote for them or any of the other competitors visit Facebook.com/collegeslam. Voting for round one ends Monday, Feb. 20 at 1:00 P.M. ET.

Last year, Jacob Tucker from Illinois College won the voting to join the 2011 State Farm Slam Dunk & 3-Point Championships. Not only were his dunks impressive enough to get him into the event, he also won the Denny’s Slam Dunk Competition and is now a member of the Harlem Globetrotters.