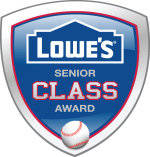 Senior utility player Phil Pohl (Cooperstown, NY) is one of 10 finalists for the 2012 Lowe’s Senior CLASS Award for baseball. The finalists were chosen by a media committee from the list of 30 candidates announced in February. Nationwide fan voting is underway to determine the winner. Fans are encouraged to vote on the Lowe’s Senior CLASS Award website (SeniorClassAward.com) through June 11. Fan votes will be combined with media and Division I men’s head coaches’ votes to determine the winner.

In 2011, he was the winner of the Dedication Award for outstanding work in the strength training room and the co-winner of the Tiger Baseball Award, given to the team’s best leader. Then prior to the 2012 season, he was named a strength & conditioning All-American by NSCA.

Lowe’s, an official Corporate Partner of the NCAA, will announce the Senior CLASS Award winner during the 2012 College World Series, which will be held from June 16-27 in Omaha, NE.