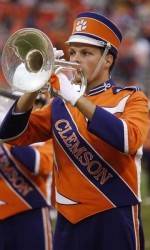 The winning college band receives a $25,000 donation for the school’s band program. Also at stake is a chance to have its winning video performance broadcast on CBS.

Tiger fans everywhere can help by casting their votes for the Clemson Marching Band at www.cbscollegesports.com beginning Monday, Sept. 20, through Monday, Oct. 4. The winning band will be announced during the Monday, Oct. 11, episode of “Hawaii Five-0.”

“The Tiger nation is a tight family, and when we roar it’s loud,” said Mark Spede, Clemson’s director of bands. “We’re asking Tiger fans everywhere to vote online and let our roar be heard.”