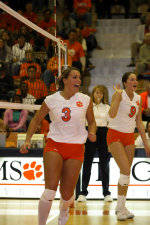 CLEMSON, SC – The 2007 ESPN the Magazine Women’s Volleyball Academic All-District Teams were announced today as selected by CoSIDA. Clemson student-athletes Leslie Mansfield and Meghan Steiner were named to the third-team for District Three. Both are senior starters on the Tiger team that boasts a 22-3 overall record and is atop the ACC with a 15-1 ledger.

Steiner, a middle from Crystal Lake, IL, is ranked 17th in the nation with a .392 hitting percentage, having tallied 243 kills with just 58 errors in 471 attempts this season. Her .314 career figure currently ranks fifth in program history. Steiner is on track to graduate this December with a degree in biological sciences and plans to study oncology in medical school. She was named to the 2007 All-ACC Academic Volleyball Team.

Mansfield, who was also a 2007 All-ACC Academic Team selection, is a three-year co-captain and a veteran of 392 career games, playing primarily at the right-side position. The St. Charles, IL native is one of just four Clemson players in history to have reached the 500-kill, 1,000-dig and 200-block milestones as she has totaled 611 kills, 1,023 digs and 230 blocks. This season, Mansfield owns 223 kills with 281 and 62 total blocks. She is majoring in elementary education.