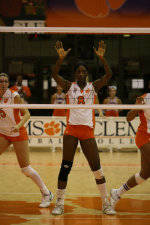 CLEMSON, SC – Clemson’s Danielle Hepburn earned Collegiate Volleyball Update (CVU) Honorable Mention accolades for the publication’s Blocker of the Year award, adding to a lengthy list of post-season honors for the 2008 senior. Hepburn finished second in the NCAA in blocks per set, had the third most solo blocks (39) nationally and posted the nation’s fourth highest figure for total blocks with 143.

The native of Miami, FL became just the second player in school history to make an all-American team when she was named to the American Volleyball Coach Association (AVCA) All-America Third-Team in December.

Hepburn broke school career records in total blocks, block assists, blocks per set and hitting percentage, while leading the Tigers to their second straight NCAA Tournament appearance in 2008. She was selected as the Atlantic Coast Conference Player-of-the-Year after recording league-highs in blocks and kills per set. Hepburn became just the third player in school history to be named First-Team All-ACC three times, joining Robin Kibben and Cindy Stern. Stern was also the only other Clemson player to be chosen to an all-America team.

Hepburn led the Tigers to a 23-10 record with 472 kills, her .391 hitting percentage and 182 total blocks. The middle blocker also earned her third AVCA All-East Region accolade this season.

To aid selection, player stats were used. Rather than strictly using blocks per game, a formula was developed to score blocking. An average number of opponent attempts per game was figured, and by using that, an approximate efficiency was calculated. Also, instead of counting solo blocks and block assists as equal, they were scaled as is done in team stats, with blocks assists counting half. Further, a player’s blocking errors and games played were also including in the figures to come up with the final numbers.

This formula is still being developed to include more blocking variables. For more information on the methods used, to provide input, or help develop these methods, please contact CVU. Feedback is welcome.