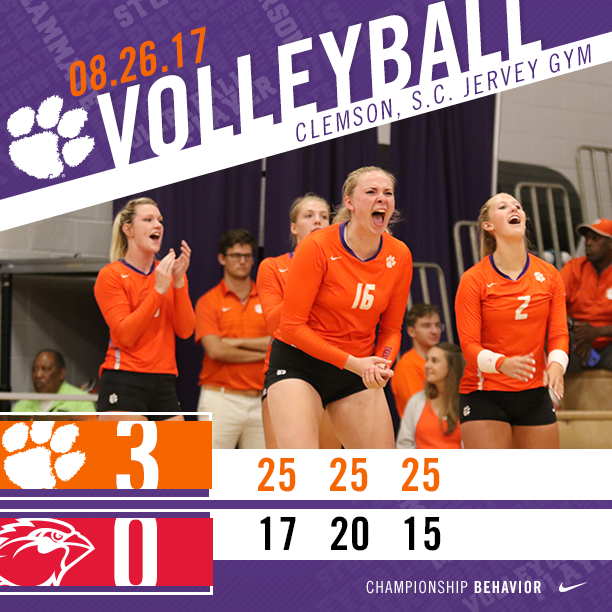 CLEMSON, S.C. – For the first time since 2014, the Clemson volleyball team started off its season 3-0 after sweeping the Lamar Cardinals [25-17, 25-20, 25-15] Saturday night in Jervey Gym. The undefeated weekend for the Tigers earned them champion status of the annual Big Orange Bash. Junior outside hitter Kailey Harvell was crowned the tournament MVP, while sophomore outside hitter Kaylin Korte and junior middle blocker Megan McGinley were named to the All-Tournament team.

“I thought that this weekend was very good for us from the standpoint of getting a five-set win, a four-set win and a three-set win underneath our belt,” said Clemson head coach Michaela Franklin. “We’ve talked a lot about championship behavior, we’ve talked a lot about the vision and what we’re after. This weekend we had to live up to that vision and the girls did a good job of that.”

In the Tigers thrilling 3-2 win over Jacksonville Saturday afternoon, Korte recorded her second straight double-double, registering 18 kills and 11 digs. McGinley also stood out for the Tigers, posting 11 kills, five blocks, a match-high four service aces, while hitting .348. The Chargin Falls, Ohio, native also added a block assist on the match-winning point in the fifth set, which the Tigers won in dramatic fashion, 15-13.

“I’m super excited for our team to get pressed and challenged. I think the biggest thing right now for us is learning how to win,” Franklin said after the match. “We’re a good team. We just need to learn how to finish. We got tested in that match and I’m happy to see that we came out with a win because we fought. We fought as a team, which was huge for us.”

The Tigers maintained their poise in the fifth after dropping a close fourth set, 25-22. Clemson was able to squeak out a two-point win in the fifth set with the help of McGinley and Harvell. McGinley notched two kills, and three blocks, including a block solo in the final set. Despite three early errors in the fifth, Harvell posted three crucial kills to help the Tigers get the win.

Clemson kept it close in the first set, but ended up falling, 25-20. With the score tied 19-19, the Dolphins scored six of the next seven points, four of which were Tiger errors.

The Tigers came out firing in the second set, breaking out to a 9-1 run with the first five points going unanswered by the Dolphins. McGinley stepped to the service line with the score at 12-5 and strung together nine straight serves, four of which were service aces. Clemson went on to hold Jacksonville to single digits and claimed the set, 25-7.

“Megan is one of our CEOs – Chief Energy Officers – of our team,” said Franklin. “She’s put in the work off the court to become a leader for this program and she’s definitely put in the work to become a leader for us on the court as well,” Franklin said. “She is just someone who has bought into the vision of what we’re doing and is a perfect example of when you’re on the bus what great things can happen.”

The Tigers face Kennesaw State at 7 p.m. Tuesday evening in Jervey Gym. Tuesday’s contest against the Owls will air on ACC Network Extra via watchespn.com and on the WatchESPN app. Live stats can be accessed on ClemsonTigers.com.

Admission is free for all 2017 home Clemson volleyball matches. For complete coverage of the Tiger volleyball team, follow @ClemsonVB onTwitter and Instagram, @ClemsonVolleyball on Facebook and ClemsonVBall on Snapchat.