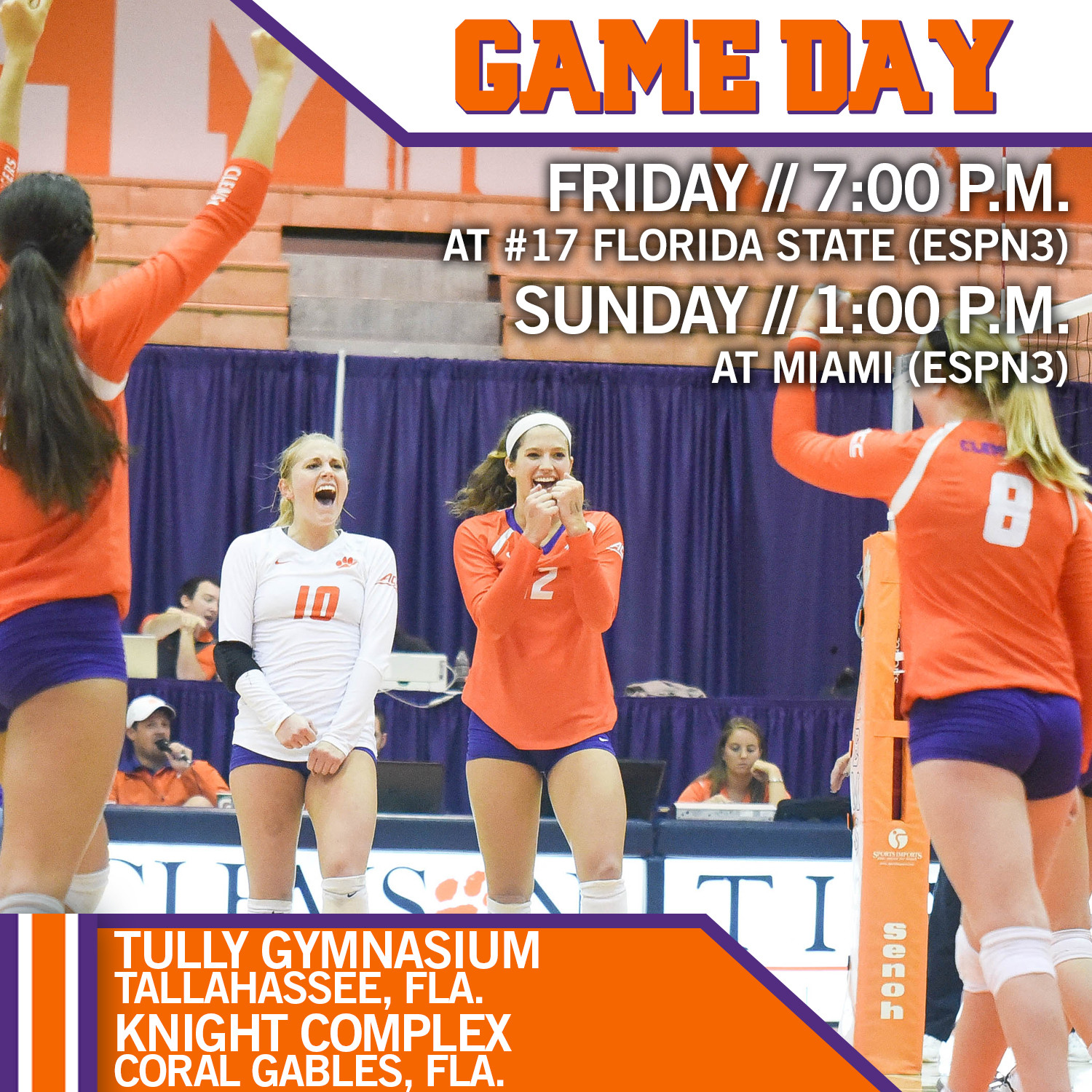 TALLAHASSEE, Fla. – On Thursday afternoon the Tigers (5-9) will head south to challenge two of their toughest opponents yet. Clemson begins the weekend with a 7:00 p.m., match against #17 Florida State (9-4) and finishes the weekend with a 1:00 p.m., matchup against Miami (7-5). Miami hasn’t earned the national recognition of the Seminoles just yet, but it was just a week ago when the Hurricanes forced FSU to five sets after falling behind 2-0 to open the match.

“The ACC is another level,” said head coach Hugh Hernesman. “Now you’re looking at two teams that were picked in the top four of the preseason poll and it was well deserved. Both, Florida State and Miami, have such a strong recent tradition in volleyball so when you’re watching them on film you’re seeing exactly what you’d expect; strong, physical, very athletic kids. Florida State and their 6-2 just wears people out, they bring big kid after big kid in there.”

Outside of Florida State’s liberos, its shortest player stands at 5-11 with the tallest being 6-5. The Tigers faced a similar team this weekend in Syracuse, but despite facing bigger, more experienced teams, Coach Hernesman has like the way his team has responded to the challenge.

“It’s going to be a challenge, we’ve been preparing for this all season long. We know the level we’re going to be expected to play at. I’m encouraged by our ability to adapt to playing against bigger players and teams with more size. There’s always a solution, that’s the way we see it. There’s always a solution to playing teams like this. It’s going to take a high level of execution on our part but we’re going to approach this like we approach every other match. We’re going to look to compete at a very high level, learn more about ourselves and play together.”

“I think they understand the level of mental focus and that their ability to be checked in at all times is paramount and I think they see the value in executing what we do defensively. After this past weekend I think our hitters are learning to adapt to playing against kids that are their size now. In preseason we saw a few teams like that but it wasn’t a full preseason of teams that are as physical or more than us.”

One young student-athlete in particular that has adjusted quickly on the fly has been Kailey Harvell. The Tallahasse, Florida native has strung together a solid freshman campaign as Clemson’s second option in the offence, tallying 158 kills and a 3.10 kills per set average to go along with her 84 digs and team-best 13 service aces.

In the Syracuse match alone, Harvell showed her ability to make adjustments in the heat of the moment as she followed up a tough first set with 16 kills on 39 swings and a .307 hitting percentage in the next three. Overall she tallied eight digs to complement her career best 17 kills and five service aces.

“Kailey is learning to play high. She’s a kid that’s athletic and she can get up there, but jumping high and playing high are two very different things. So she’s learning to play high above, create angles from a higher contact point and learning how to take advantage of blockers hands. She saw those skills work against Syracuse who is very good and she had a lot of success. I think it’s too early to say that’s the breakthrough match, but if you look at her continue along in the next few weeks here I think you can look at that match and go ‘Yup, that was the one where it all really clicked for her’.”

Another freshman that has turned heads in recent matches is Kennedy Wilson-Talmadge. The libero out of Orlando, Florida is coming off her best performance of the season with 16 digs, 13 service receptions, two assists, a service ace and a kill against Syracuse.

Wilson-Talmadge has embraced her role off the bench this season as the understudy to Keelie Arneson who transferred to Clemson this season from Northwestern State. The freshman recognizes she’s learning from one of the best in NCAA history as Arneson currently ranks 23rd all-time with a career average of 5.31 digs per set. Her 2,389 digs throughout her career makes her the active career digs leader and positions her just 10 digs outside of cracking the NCAA’s list of top-25 career digs leaders.

“Since the day we started talking to Kennedy and she found out Keelie was transferring here, she took it upon herself to completely model everything that Keelie does and it’s paying off for her. If you watch Keelie in practice whether it’s the simplest drill or it’s a arm warm-up or just simple pepper, Keelie is completely engaged and I think Kennedy notices that. She sees what it takes to be as detail oriented as Keelie and she knows that they have very similar traits – they’re both very athletic, they’re both very fast with great floor speed. I think for some of the younger players, they have to get that affirmation that they do belong at this level and I think as she continues to progress, do well in our gym and have it carry over into match play, that confidence grows and then all the talents that she came here with will all be able to come out.”

Overall this season Wilson-Talmadge has 75 digs in 37 sets, which stands as the most of any Clemson reserve. Her 75 digs is the sixth most on the team and she is only 21 digs away from owning the third most with eight fewer sets played.

“It’s been exciting to see her make plays, she adds a lot of energy to our team, she’s about as intense as it gets, she plays really hard, she competes really hard, she’ll throw her body anywhere with kind of a reckless abandon. Whether it’s a pursuit ball or a hard driven ball, Kennedy is starting to make a lot of plays and a lot of it just has to do with her preparation, which, she gets all the credit in the world for the way she comes to practice everyday.”

Notes (in 140 characters or less)   • Clemson’s eight freshmen is the highest total in the Atlantic Coast Conference.• Hugh Hernesman is the ninth head coach in Clemson volleyball history.• Clemson is currently fourth in the ACC, averaging 15.29 digs per set.• Keelie Arneson is 10 digs away from cracking the NCAA’s all-time list of top 25 digs.• If Keelie Arneson duplicates her ‘13 performance (712 digs) she will have the second most digs ever recorded in D-I women’s volleyball.• Keelie Arneson ranks 23rd in NCAA history with a career 5.29 digs per set average.• Keelie Arneson currently leads the ACC with a 5.27 digs per set average.• Keelie Arneson is the NCAA’s active career digs leader with 2,389 digs.• Keelie Arneson’s 5.27 digs per set average ranks her 17th in the nation and is the second best average in a power five conference.• Leah Perri headlines the Clemson attack with 191 kills in 2015 which is the sixth most in the ACC.• Leah Perri ranks sixth in the conference with a 3.75 kills per set average.• Leah Perri is tied for third in the ACC with 220.5 points and is fifth with 4.32 points per set.• Leah Perri has double-digit kills in 12-of-14 matches this season.• Kate Federico ranks sixth in the conference averaging 9.02 assists per set.• Kate Federico ranks seventh in the conference with 460 assists.• Kate Federico has seven double-doubles this season and nine matches with 30 assists or more.• Kate Federico’s 1,171 assists last year are the second most ever recorded by a Clemson freshman.• Kate Federico’s 1,171 assists in 2014 was the second highest total in the ACC and the most recorded by a freshman.• Kate Federico’s 1,171 assists are the most recorded by a Tiger in the last five years.• Kailey Harvell has recorded 10 or more kills in 10 of Clemson’s 14 matches this season.• Kailey Harvell is second on the team and not far behind Leah Perri with 158 kills and a 3.10 kills per set average.• Kailey Harvell is coming off of her best match yet, logging 17 kills, five aces and eight digs against Syracuse.• Kailey Harvell’s 17 kills and five service aces against Syracuse are career bests.• Kailey Harvell leads Clemson with 13 service aces.• Kennedy Wilson-Talmadge recorded her first career match with 10 digs or more, digging 16 balls against Syracuse.• Kennedy Wilson-Talmadge has 75 digs in 37 sets, which stands as the most digs of Clemson’s reserves.• Kennedy Wilson-Talmadge is 21 digs away from the third highest total on the team with eight fewer sets.