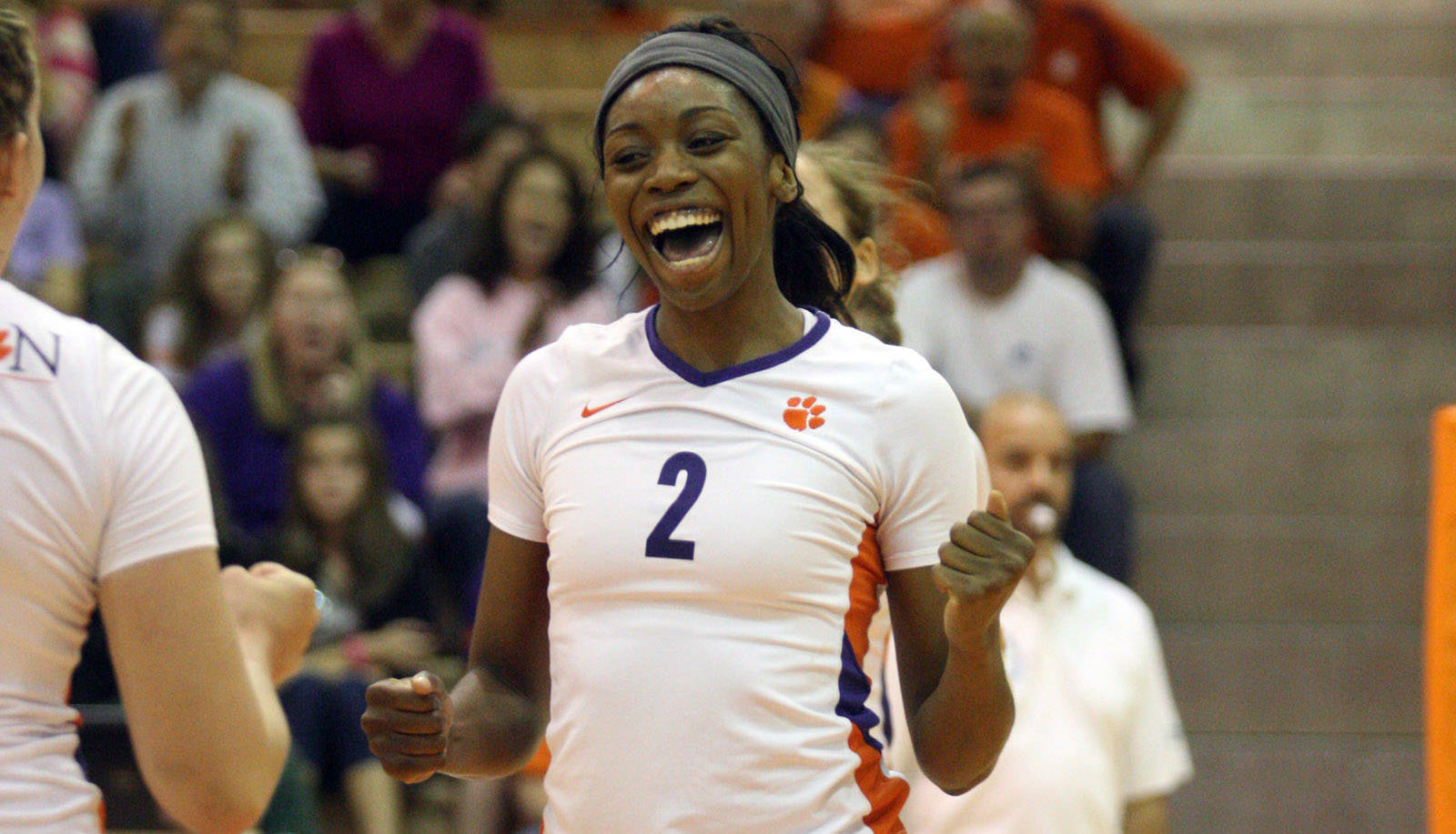 The Tigers have now won eight of their last ten as they head back home for their final five matches. Clemson defeated both Virginia Tech and Virginia on the road in the same season for the first time since Tech joined the league. Clemson won in Blacksburg, 3-2, on Friday night before busing to Charlottesville late, and playing the Cavaliers Saturday.

Sandra Adeleye had her first career double-double with 16 kills and a career-high 11 blocks, including four in a five-point stretch in the fourth set. She’s now within 16 kills of 10th on Clemson’s all-time list, as she has 1425 in her career.

Mo Simmons had another strong match, following up her 25 kill-18 dig night in Blacksburg with 16 kills and 18 digs against Virginia, to go along with two solo blocks and two aces.

As a team, Clemson hit .236 and held Virginia to a .166 mark. Clemson’s 16.0 blocks were a huge factor, as six players were in on two or more on the night. Junior setter Hannah Brenner had 49 assists, ten digs, and four blocks in the match, her second straight double-double.

Kristin Faust had a quiet nine kills and hit .318, the highest of any Tiger, while also posting 20 digs in the match. Clemson libero Natalie Patzin inched closer to the 1,400 career digs plateau, registering 23.

Jessica O’Shoney had 17 kills, while Kayla Sears had 16 to lead the Cavaliers. Libero Emily Rottman tallied an incredible 40 digs from left back.

The Tigers improved to 40-16 all-time against the Cavaliers, the most wins against a single opponent in school history.

The win was Clemson’s sixth in a row on the road, and the Tigers will finish the regular season 6-5 in road contests.

Virginia took the first set, 29-27, as O’Shoney blasted eight kills to lead all players. Each team fought off two set points, but the Cavaliers shook off a 27-26 deficit to score three straight to take the frame.

Clemson trailed early in the second set before going on a 10-1 run to take a 19-15 lead, and the teams traded sideouts until O’Shoney missed her serve on set point to tie the match at 1-1.

The teams traded points coming out of intermission, with the Tigers holding a tight, 12-11 advantage before blowing the set open with a 7-1 ru, behind four kills, two blocks, and a Patzin ace that floated to the center of the floor untouched. Virginia scored the next four to pull within three, but Brenner served the Tigers to set point, which they claimed on Alexa Rand‘s solo block.

Virginia raced out in the fourth set, taking an 8-4 lead as Sears had a pair of aces and three kills. They surged even further ahead, taking a 15-9 lead. Adeleye and Faust then combined for six kills during a 9-1 Tiger run capped with a pair of Adeleye blocks, that gave Clemson a 18-16 lead. Virginia tied it at 18-18, but Clemson again had back-to-back blocks, with Adeleye in on each. At 23-22, Faust nailed a kill cross-court from the left for her ninth kill, and a pair of Cavaliers had a miscommunication on match point to clinch it for the Tigers.

The Tigers will return home to take on NC State and North Carolina in Jervey Gymnasium next weekend.