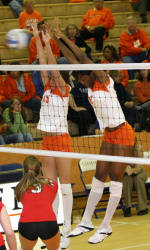 CLEMSON, SC – The Tiger volleyball team will head to the state of Virginia this weekend for a pair of conference matches. Clemson (8-4, 0-1 ACC) will take on Virginia Tech (10-2, 1-0) in Blacksburg on Friday night before facing the Cavaliers (8-5, 0-1) in Charlottesville on Saturday. Both matches are slated for 7:00 pm starts.

The Tiger defense has been solid through the first four weeks of the 2008 season, averaging 3.06 blocks per set to rank second nationally. The team set a school record for block assists in a match last weekend with 35, led by reigning CVU.com National Player-of-the-Week Danielle Hepburn, already the school’s all-time block assist leader, ranks second in the nation individually with a 1.67 blocks per set average. The senior from Miami, FL is also hitting a team-high .351 figure with 157 kills. Lia Proctor leads the Clemson offense with 177 kills. The native of Inman, SC is the only player in the ACC averaging more than 4.0 kills per set.

Livestats will be available for both matches over the weekend. Visit Virginia Tech’s athletic webpage for Friday’s action, and access www.clemsontigers.com for Saturday’s. Fans can also follow the match against Virginia online with ACC Select’s live video stream.

Scouting The Opposition The Hokies opened conference play with a sweep of their in-state rival Virginia on Tuesday which extended their winning streak to seven straight. Chris Riley is in his third year at the helm at Virginia Tech, leading his team to a 10-2 record to open the 2008 season. Felicia Willoughby and Justine Record have combined for 219 kills as the Hokies’ top two offensive weapons. Willoughby is also hitting a remarkable .408 percentage for the year, while posting 47 total blocks. Virginia Tech is limiting their opponents to just 9.48 kills per set with a meager .124 hitting percentage. The Hokies have also recorded better statistics in blocks and digs than their opposition.

The Cavaliers are in their first season under Head Coach Lee Maes, who had been an assistant at Nebraska for the past three years. Virginia enters the weekend with an 8-5 record after falling to Virginia Tech in mid-week action. The Cavaliers will take on Georgia Tech on Friday night before facing the Tigers on Saturday. Lauren Dickson leads the team wtih 146 kills for a 3.34 per set average. Virginia is hitting just .206, but the Cavaliers are holding their opponents to a .177 clip while averaging 2.39 blocks per set.

Clemson Against The Field Clemson has won three straight over the Hokies to improve to 8-5 all-time in matches against Virginia Tech. Last season, the Tigers won by a 3-1 margin in Blacksburg following a sweep of the Hokies to open the conference season. That win on Virginia Tech’s home court in 2007 was Clemson’s first in four attempts. Virginia was the only team to defeat the Tigers during their 2007 ACC Champion season, doing so at Memorial Gym in the second match-up of the season. The Cavaliers’ victory tied the all-time score at 10 wins apiece in matches played in Charlottesville. However, Clemson still owns a 32-14 overall advantage the a series that dates back to 1981.