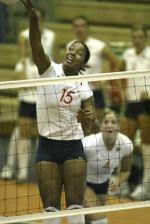 Volleyball To Open Season On Wednesday

The Clemson volleyball team will open its 2004 campaign on Wednesday night as the Tigers take on the Western Carolina Catamounts. First serve is slated for 7:00 PM at Jervey Gym on Clemson’s campus. Admission is free to the public.

Clemson holds a 21-10 all-time advantage against Western Carolina, although the teams have not met since 1993 when the Tigers won two matches against the Catamounts under then-first-year head coach Jolene Jordan Hoover. The Tigers return seven letterwinners from last year, including four starters. Leading the way for Clemson will be a pair of All-Region performers from last season, Leslie Finn and Lori Ashton. Ashton, a senior from Waldorf, MD, posted 447 kills, a team-best .295 hitting percentage and 151 total blocks in 2003. Finn, a native of San Diego, CA, led Clemson with 568 kills and a league-high 4.40 kills per game average. Finn also recorded 354 digs and 32 service aces last season.

The other returning starters for th Tigers are Meghan Stanton, an outside hitter, and Stephanie Haskell, setter. Stanton started 20 matches in 2003, totaling 154 digs and 24 block assists. Haskell, voted MVP by her teammates in 2003, led the Tigers with 1,340 assists in her first year as a starter. Haskell set a career-high with 71 assists against Maryland on October 31. Other returning letterwinners from 2003 are Sarah Gardner, Lindsey Meleski and Dawn Robertson. Gardner and Meleski combined to see action in 16 games last season, while Robertson tallied 247 assists at setter.