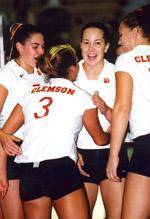 The 2003 Clemson Tiger volleyball team will open its season at the Illinois State Classic on Aug. 29-30 in Normal, IL. Clemson will face preseason ranked Nebraska, as well as Illinois and Illinois State, as head coach Jolene Jordan Hoover returns to her alma mater.

Ashton, the Tigers’ all-time leader in hitting percentage (.343) and a member of the 2002 AVCA All-East Region team, ranks sixth on Clemson’s all-time best list in kills per game. The middle hitter led the team in kills with 497 and a 3.88 kills per game average last season.

Red-shirt junior Beasley will lead the Tigers at the outside hitter position. The Channahon, IL, finished the 2002 season with 401 kills and a 3.13 kills per game average. She posted double-digit kills in 23 of 32 matches, as well as seven double-doubles.

Zoric, a Verizon Academic All-District III Team member, led the Tigers in total blocks with 147 during the 2002 season. The senior middle hitter ranked second in the ACC last season in blocks per game with a 1.20 blocks per game average.

Scouting Nebraska The seventh-ranked Huskers return seven starters to the 2003 lineup that posted a 31-2 overall record and won the Big 12 Conference title with a perfect 20-0 mark. Head coach John Cook is entering his fourth season with the Huskers and is looking forward to another successful season behind the play of senior Anna Schrad and sophomores Melissa Elmer and Jennifer Saleaumua. Nebraska was picked as the early favorite to win its sixth straight league title. Saleaumua finished the 2002 season with 286 kills, 302 digs and 79 total blocks (6 solo). The outside hitter earned first team Big-12 honors and was named Big 12 Player of the Week for the week of Nov. 25. Elmer posted a .381 hitting percentage last season with 131 total blocks, while Schrad tallied 249 kills with 212 digs and 70 total blocks (10 solo). This will be the first meeting between Nebraska and Clemson. The Tigers are 1-3 all-time against Big 12 teams.

Scouting Illinois The Fighting Illini return four starters from the 2002 team. Illinois finished last season with an overall record of 13-16, while finishing ninth in the Big Ten. Seventh-year head coach Don Hardin and the Illini are predicted to finish ninth in the Big Ten this season. Seniors Lisa Argabright, Shelly O’Bryan and Melissa Vandrey will help lead Illinois this season. Argabright returns after posting 263 kills with a .324 hitting percentage and 97 total blocks last season. O’Bryan led the team in blocks last season with 107 total blocks, while Vandrey was second on the team in kills with 309. Clemson and Illinois have never met on the court before. The Tigers are 1-6 against Big 10 teams.

Scouting Illinois State Illinois State returns five starters from the 2002 squad that finished fourth in the Missouri Valley conference a year ago. The Redbirds posted a 14-15 overall record last season and an 11-7 mark in league play. In her 12th-year as head coach, Sharon Dingman will look to senior Staci Boyce and sophomores Emily Kabbes and Laura Doornbos to lead the team this season. Boyce recorded 339 kills with a 3.38 kills per game average and 185 digs last season, while Kabbes tallied 165 kills and 86 total blocks. Doornbos recorded 149 kills last season with 47 total blocks. The Tigers and Redbirds last met in 1999, as Clemson defeated Illinois State 3-0 in Jervey Gym. Clemson has a 6-3 all-time record against teams from the Missouri Valley Conference.