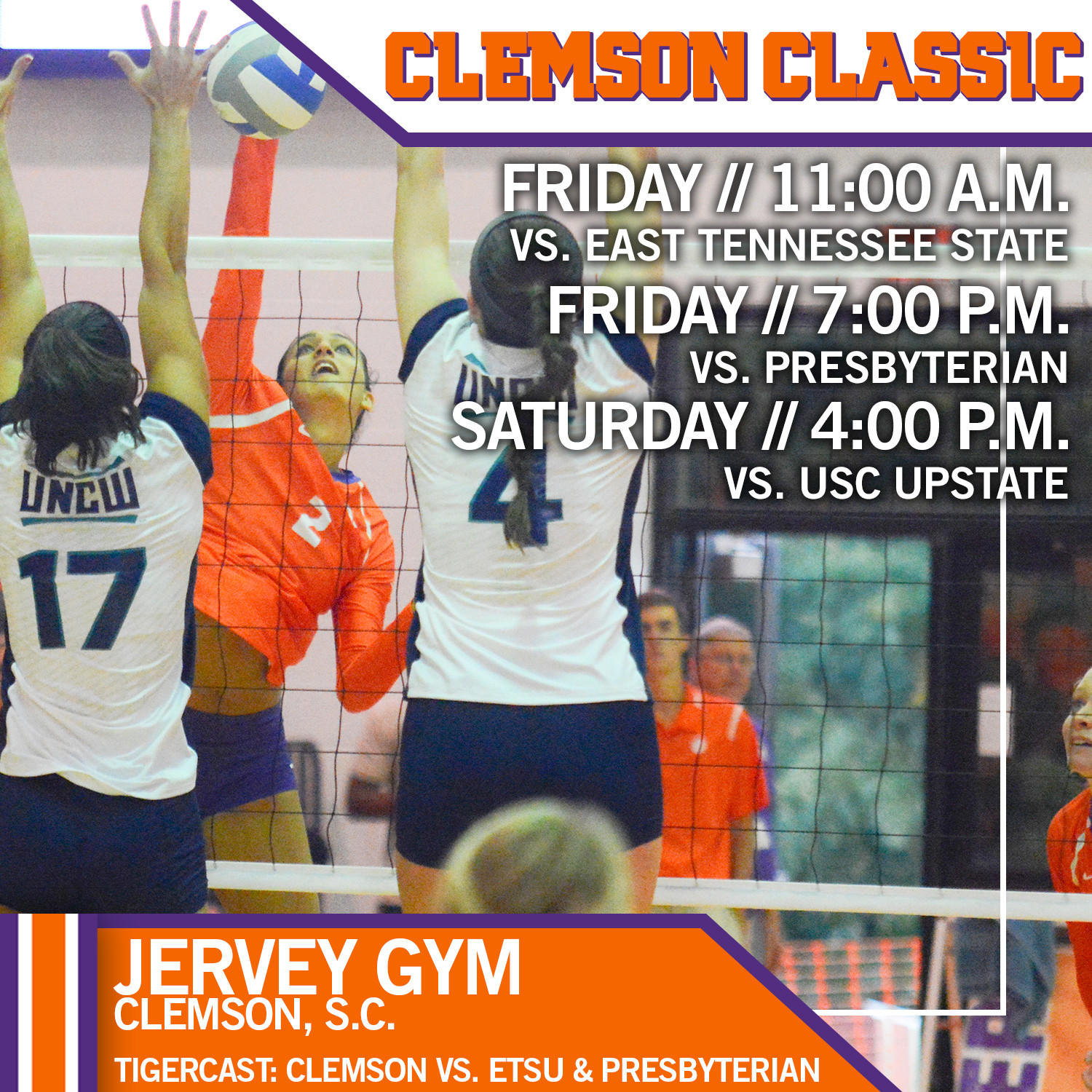 CLEMSON, S.C. – In its final week of home non-conference competition, Clemson will host East Tennessee State, Presbyterian and USC Upstate in this year’s Clemson Classic. In honor of Student Appreciation Night on Friday night, the first 200 students to arrive will receive free pizza. Fans unable to attend the Clemson Classic can view both of Friday’s matches on TigerCast.

The first match is set to begin on Friday at 11 a.m., in Jervey Gym against East Tennessee State, followed by a match against Presbyterian at 7:00 p.m. The Tigers will then wrap up their final home tournament of the season at 4:00 p.m., on Saturday against USC Upstate.

“We’re happy to be back in front of our fans this weekend,” said head coach Hugh Hernesman. “Jervey has such a great atmosphere and I know our team really enjoys playing at home in front of such loyal and passionate fans. “

Clemson’s big three, Keelie Arneson, Kate Federico and Leah Perri have enjoyed a great deal of success in the first two weeks of the season. Arneson leads the ACC and is 11th in the country, averaging 5.65 digs per set at libero. Federico ranks fifth in the conference, averaging 9.23 assists per set to Perri’s benefit, as she is eighth in total kills (77) and fourth in points (91.5).

They succeed while it seems the freshmen improve with every match of experience. Kailey Harvell isn’t far behind Perri in the kill column with 68 on the season, averaging 3.09 per set. Sofia Hruby and Megan McGinley have served the Tigers well in the middle as Hruby leads the team with 17 blocks and McGinley has 15. They’ve both contributed offensively as well, combining for 53 kills.

“We’re liking how the team is improving as we go along and this weekend is another opportunity to be tested and see how we perform.”

Clemson is coming off a difficult weekend at the Carolina Classic where it faced South Carolina in a four-set match and mid-major powerhouse, Furman in five sets prior to defeating Winthrop in three. Despite being one of the youngest teams in the ACC with eight freshmen, Clemson has been competitive in each of the six matches it has played. Four of the six teams the Tigers (2-4) have faced this season finished with a better RPI last year, yet eight of the 13 sets lost this season have been decided by three points or less.

“We’ve had the ability to play some great teams so far and I feel like we’re learning to play together and learning how to execute our scouting reports- because while we have a core system, we need to make certain changes and adaptations to each and every opponent,” Hernesman said. “That isn’t easy. Especially with such a young group and then also making adjustments based on a couple random, freak injuries.”

“The bottom line is that we’re fighting and competing.  That will go a long way and allow us to grow as a program much quicker.”

Parking Guidelines For The Clemson ClassicFriday: Parking in the Jervey parking lot will be open to all.  Cars may not be left over night in any on-campus lot that is utilized for parking on football gamedays.  All cars left over night in any lot will be towed at the owners expense.  Saturday: Due to the Clemson vs. Appalachian State home football game, there will be no parking available around Jervey Gym without a parking pass.  Any one in these lots without proper credential will be towed at the owners expense. You may park in any General Public Parking lot.  Suggested Saturday Parking: University Beach on Hwy. 93 carries a cost of $20 and has a shuttle that will drop off just above Jervey Gym and take you back to your car.  You can pre-pay for this lot if you choose to use this option.