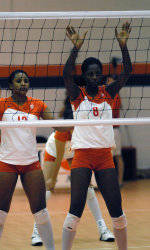 CLEMSON, SC – The Clemson volleyball team will welcome the Georgia Bulldogs to Jervey Gym on Tuesday evening for its final home match of the 2007 spring season. The teams are slated to begin play at 6:30 pm.

The Bulldogs are coming off of a 6-25 season but will be playing their first match with newly hired Head Coach Joel McCartney. Last season, McCartney guided Winthrop to its fifth straight NCAA Tournament.

Clemson’s spring season will conclude at the Sports Performance Tournament in Aurora, IL on Apr. 14.