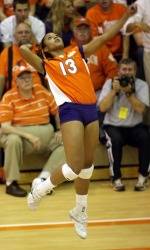 CLEMSON, SC – The Tigers will begin defense of their ACC title on Thursday night as the Georgia Tech Yellow Jackets (7-2) come to Jervey Gym to kick off the Clemson Classic. The conference foes will meet at 7:00 pm in the Tigers’ designated Solid Orange event that will be video streamed live on ACC Select as well. Clemson (6-3) will also face Florida A&M (2-5) on both Saturday and Sunday as part of the tournament. Saturday’s match will be held at 11:00 am while the teams will meet at 1:00 pm on Sunday.

In addition to the ACC Select broadcast with Roy Philpot, fans can follow the action with livestats at www.clemsontigers.com.

As part of Thursday night’s Solid Orange event activities, fans will receive pom poms as they enter Jervey Gym, and Solid Orange and Clemson Classic t-shirts will be thrown out to the crowd throughout the match. The Clemson Tiger Pep Band will perform and there will be a special promotion during the intermission between games two and three.

Junior Lia Proctor leads the ACC in kills per set with a 3.74 average and a team-high 116 kills. The native of of Inman, SC also ranks third on the team in digs in her first season playing a full rotation. Trailing her with 110 kills is senior middle Danielle Hepburn, who became the program’s career block assist leader last weekend. She has posted 42 block assists in 2008 to help the Tigers to average 3.13 per set, a figure that ranks third nationally. Also aiding the defense is libero Didem Ege, who continues to climb the career charts with 1,292 digs in just her junior season.

Scouting The Opposition Georgia Tech will enter Thursday night’s match-up with a 7-2 record. Rookie Alison Campbell owns a team-high 106 kills as the Yellow Jackets are averaging 13.37 kills per set and hitting a .280 clip overall. Defensively, Michelle Kandell has tallied 149 digs already in 2008 while Asia Stawicka leads the team at the net with 38 total blocks.

Meanwhile, the Florida A&M Rattlers will bring a 2-6 record into the Clemson Classic. Jovana Blazeski leads the Mid-Eastern Athletic Conference with a 3.54 kills per set average. The team is averaging just over one block per set, while recording nearly 11 kills per set.

Clemson Against The Field The Tigers swept the series with Georgia Tech last season to improve to 31-19 all-time against the Yellow Jackets. Clemson won by a 3-1 margin after dropping the first set at Jervey Gym in late October. Four Tigers hit in double figures in the match, led by Lia Proctor with 16. Proctor also posted a .483 hitting percentage, one of her best performances of 2007. The win was Clemson’s 15 at home in 23 attempts.

Florida A&M made the trip to Tigertown last season as well, participating the Big Orange Bash. Clemson swept the Rattlers in the tournament match-up, which was just the third meeting all-time between the schools. The Tigers claimed the victory in each.