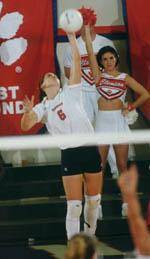 Volleyball to Face Duke on Tuesday

Duke returned four starters from last year’s 13-14 squad that finished fifth in the ACC with a 7-9 record. The Tigers are 13-20 all-time against the Blue Devils but have won eight of the last ten meetings between the teams.

The Demon Deacons returned three starters from last year’s team that was 25-9 overall and finished third in the ACC (10-6). Clemson holds a 13-1 advantage over Wake Forest. The only loss to the Demon Deacons occured on October 10, 1998, at Jervey Gym when Wake Forest took a five-game win over the Tigers.

Clemson is coming off a weekend series with conference rivals Maryland and Virginia. The Tigers defeated Maryland 3-0, but lost to Virginia 3-1. Jodi Steffes leads the Tigers in total kills (592) and kills per game (4.34) while Jessi Betcher is the assists leader. Betcher has 619 assists this season and is averaging 10.86 assists per game. Steffes also leads Clemson in digs with 205 and in digs per game (3.87).