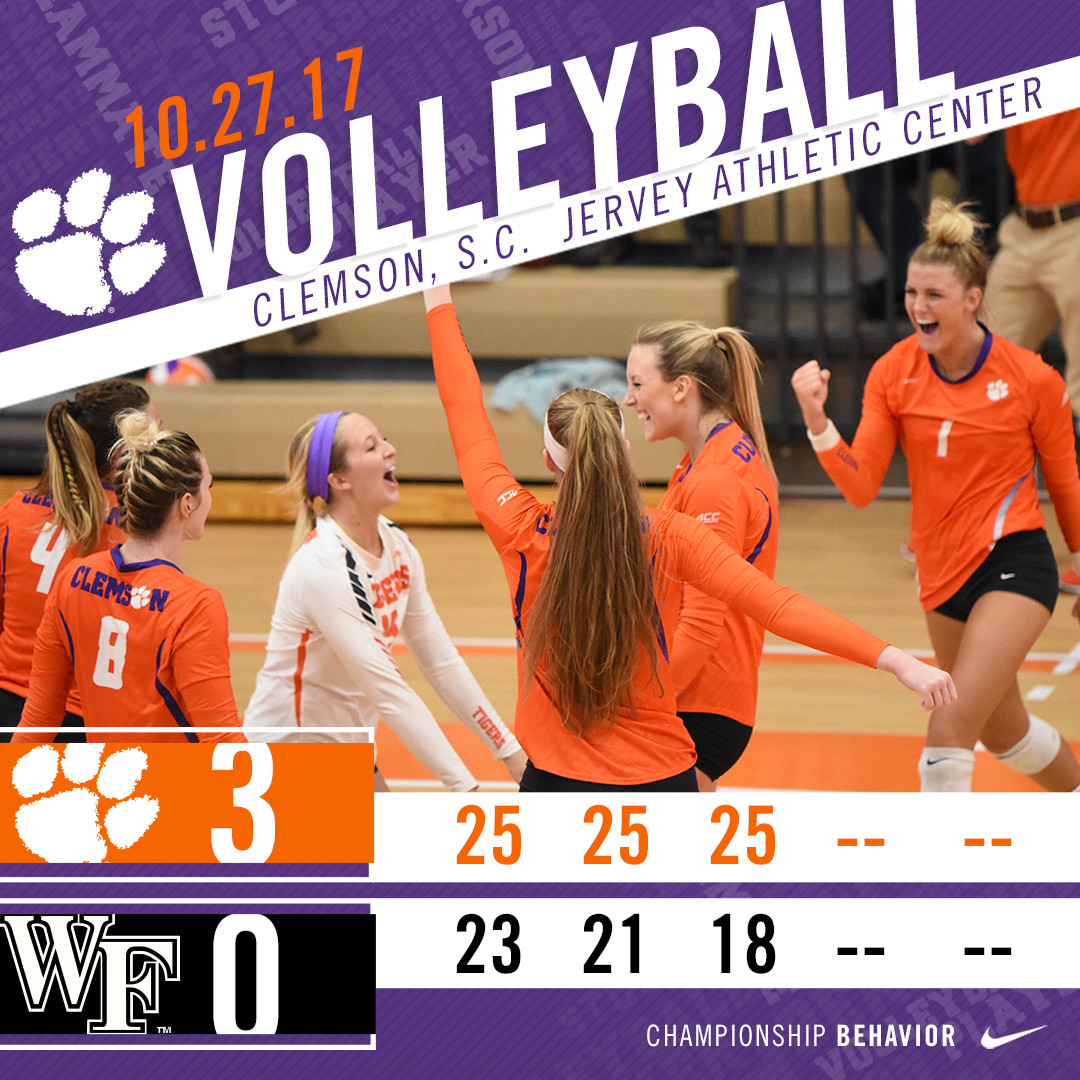 CLEMSON, S.C. – The Clemson volleyball team swept Wake Forest (25-23, 25-21, 25-18) in the opening match of volleyball alumni weekend Friday evening in Jervey Gym. The Tigers earned their second ACC victory of the season in large by the front row, which totaled 10.0 blocks, good for the third most this season.

“I liked the way our team played and the way we played together tonight. I’m really proud of the direction that we’re heading with the culture that we’ve developed within the program. It’s exciting to see some things that are happening that probably weren’t happening a month ago,” said Clemson head coach Michaela Franklin.

Clemson and Wake Forest went back and fourth to open the match with neither team holding more than a three-point lead through the first. A kill by Kailey Harvell tied the match at 17-17 midway through the set. The Demon Deacons responded with a 3-0 run later in the set to take a 22-20 lead, prompting Clemson to call timeout. Coming out of the timeout, Clemson embarked on a 5-1 run to close out the first, claiming the last four points of the set. The Tigers saw five different players collect at least one block in the opening frame.

“We’ve really been working a lot in practice with blocking. We have the players that have the ability to be physical. We’ve put an emphasis on being aggressive at the net, which wes saw them do tonight and it definitely worked out in our favor.”

The Tigers gradually jumped out to a 15-10 lead to open the second, which was fueled by five Harvell kills. The Demon Deacons made a late-set push, narrowing the deficit to two points, 23-21. With Wake Forest’s Madeline Holt behind the service line, the Tigers gained the side out on kill by senior setter Keely Hayes on a ball from Kaylin Korte. Hayes then went to the service line for the Tigers, which led to the set-winning kill by Alyssa Deloney on a pass from Hayes.

Both teams were neck-and-neck to open the third. The Deacs tied the match, 9-9, to begin a 4-0 run. Clemson responded with a 3-0 run of its own to tie set, once again, 12-12. From there, Clemson dominated the rest of the third, sparking a 13-6 run to close out the match. Junior middle blocker Megan McGinley sent a ball from Hayes off the hands of a Wake blocker that went flying into the Jervey stands to claim the Tigers second ACC win of the season.

Clemson returns to Jervey Gym Sunday, Oct. 29 at 1 p.m. as they take on Duke (14-8, 6-5 ACC) for the first and only time of 2017. Sunday’s contest will air on ACC Network Extra. Live stats for Sunday’s match can be accessed on clemsontigers.com.