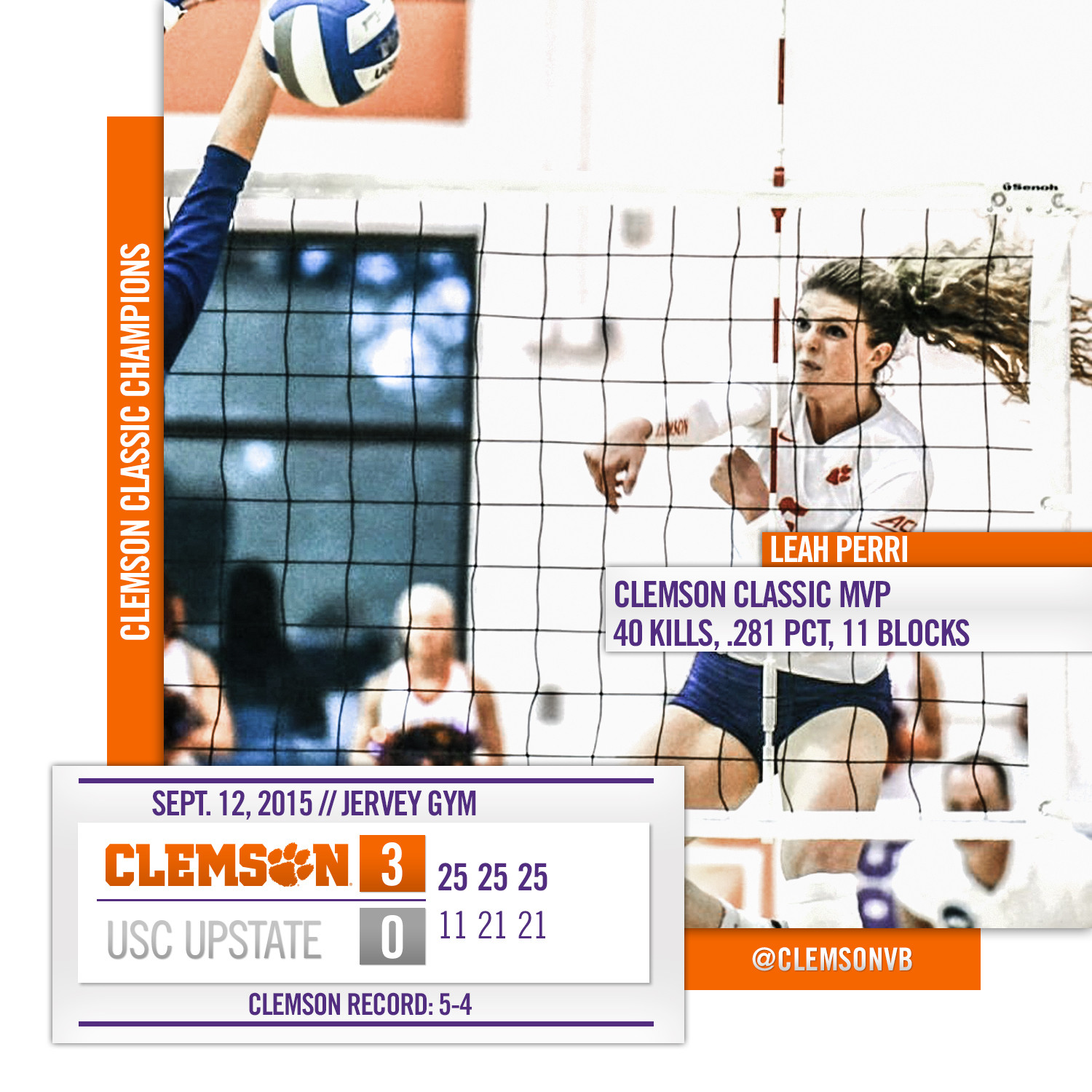 CLEMSON, S.C. – On Saturday afternoon Clemson (5-4) fired on all cylinders to record its fourth consecutive win, declaring itself the champion of the Clemson Classic by defeating USC Upstate in three sets (25-11, 25-21, 25-21). Leah Perri is the MVP of the tournament and is joined by Kate Federico and Kailey Harvell on the All-Tournament Team.

“Our goal every weekend is to get better, and I think we got better,” said head coach, Hugh Hernesman. “We did a better job of playing low error volleyball. That was one of the things we felt we needed to work on especially out of system.”

“I think our knowledge and execution of our system is improving every match that we play in. Every weekend we play we see cleaner execution and better blocking. I think Sofia (Hruby) is doing a really nice job of identifying and knowing what we do system-wise.”

Hruby followed up her big match against Prebyterian last night with another stellar performance on Saturday, recording six kills on 11 swings with just one error for a .455 hitting percentage to go along with her seven blocks.  The seven blocks is the most attempts the freshman has denied this season.

“All weekend long Sofia was around .500, very efficient, she had seven blocks against USC Upstate, she had five against Presbyterian. So I think she’s starting to recognize bad attack situations and keeping the ball in play but then also when she gets her look she can take big swings and kill the ball which is what we need out of that spot.”

Together, the Tigers hit .310 with just 11 attack errors on 113 attempts. The effort is Clemson’s best offensive performance so far this season.

“The most errors we had was three by anyone so that’s good. It means we’re playing smart in bad situations for ourselves because we’re not always in system, and nobody is.”

Perri earned MVP honors after leading the Tigers with 12 kills and a .310 hitting percentage, complemented by four blocks. She finishes the weekend with 40 kills, a .281 hitting percentage and 11 blocks. She has now has recorded double-digit kills in all but one of the nine matches played.

On the other side of the net, Harvell put up solid kill numbers again killing 10 balls against USC Upstate and 23 on Friday, giving her seven matches with kills in double-figures. However, Hernesman was more excited about how the freshman’s game has improved this week.

“All weekend Kailey was a low error player. When you look at this weekend compared to last weekend, that’s a huge, huge improvement for her and I thought she played well last weekend but this weekend was just different.”

“We made an adjustment yesterday in some approach things and where she was taking the ball and it really got her off tape level, off the block, through holes, over seams and doing all the things she’s capable of doing because she’s so athletic.”

Sydney Moseley was a factor on offense as well as she was errorless in 19 attempts, killing nine of them while collecting 10 digs and two blocks.

“Sydney was the other one that really stood out. Nine kills, no errors and she blocked the slide pretty well too… She’s ‘Steady Syd’.”

Feeding the offense of course was Federico. She enjoyed five kills on 13 swings to go along with her 33 assists and 11 digs. The performance marks her fourth double-double of the season and her sixth match with 30 assists or more. Overall she finishes the Clemson Classic with 15 kills, 98 assists, 24 digs and four blocks.

“Kate again I thought was intelligently offensive. She was offensive at the right times. I think that’s what we need when she’s in the frontcourt because that offense loosens things up for the rest of our hitters when she’s up there. In terms of her set selection, she’s so consistent. She can put the ball in a lot of very good places in bad situations so when our passing breaks down our hitters still get hittable balls from Kate.”

“She’s such a strong, good volleyball player that I always feel like there’s more for her. I feel like there’s more that she can do, she can be more complete but we’re seeing that progress. We weren’t lucky enough to watch her last season but from what we’ve seen this spring to now is you’re starting to see a more complete volleyball player. She’s instinctive; she knows how the game is played so to see her be good defensively too, that’s big. Teams play for setters that play good defense and they get inspired by that and I think she did that this weekend.”

Keelie Arneson’s 20 digs is her fourth 20-plus dig effort and led a defense that included three Tigers with double-figure digs and held Upstate to a .129 hitting percentage.  The dig total give her 46 this weekend and 159 on the season. She is just 109 digs away from breaking into the NCAA’s list of all-time career digs leaders.

“That’s Keelie being Keelie. I think what’s impressive about that is you get 20 digs in three sets and she played half of those rotations at mid-back. It’s not her natural position but she knows our defense so well and she’s so instinctive that we can put her anywhere.”

The Tigers are back in action on Friday, September 18 at the SMU Classic in Dallas, Texas.