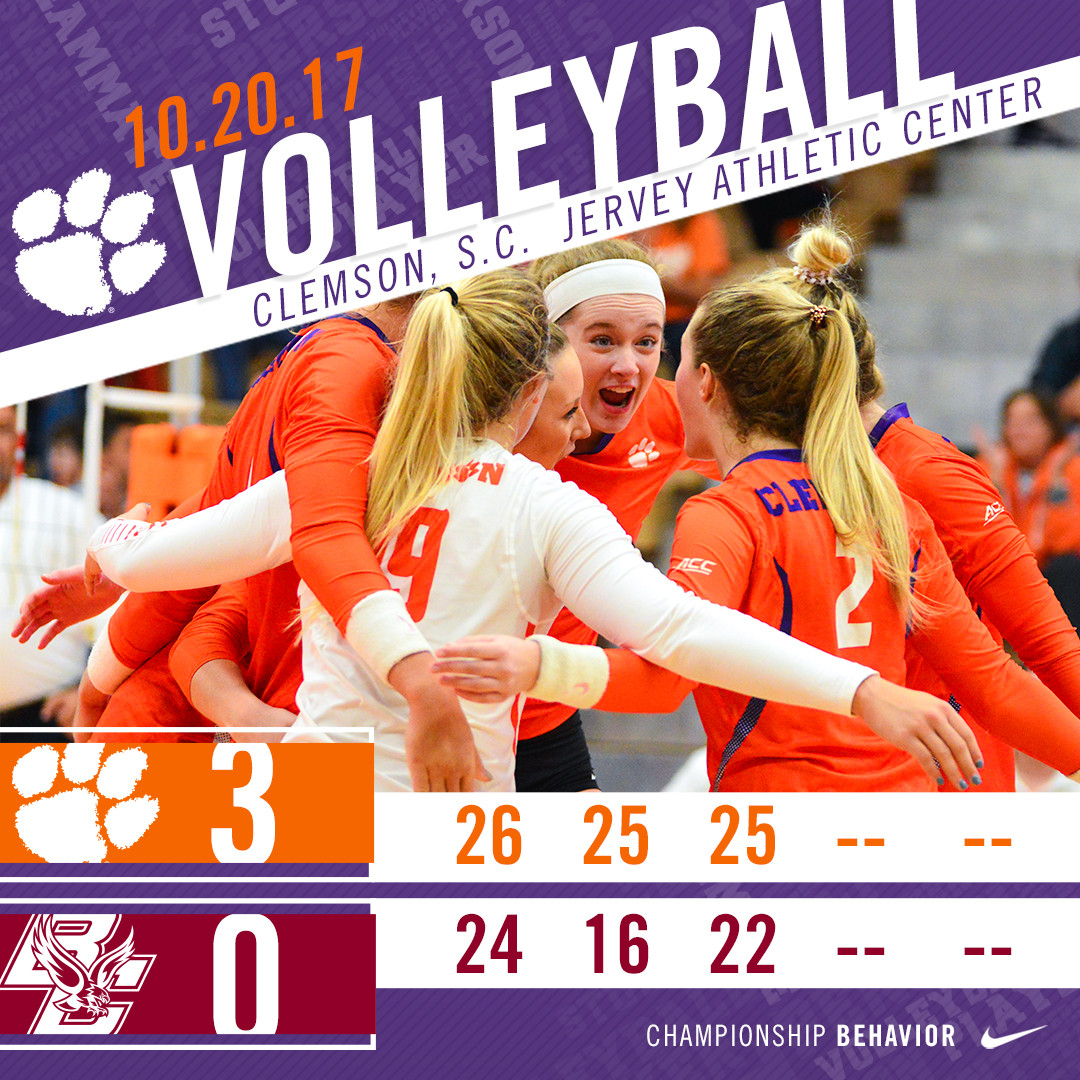 CLEMSON, S.C. – The Clemson volleyball team (6-15, 1-8 ACC) swept Boston College (26-24, 25-16, 25-22) Friday evening in Jervey Gym. With the win, the Tigers earned their first ACC victory of the season. Clemson was led by senior setter Keely Hayes, who posted 31 assists, just one shy of her Clemson career-high in a three-set match. Outside hitters Kaylin Korte and Kailey Harvell added 16 and 15 kills, respectively, to lead all hitters for the match.

“Tonight’s probably the first time that people not within our bubble are seeing the hard work that the team has been putting in,” said Clemson head coach Michaela Franklin. “We’ve been working hard the entire season and the team has done a fantastic job of listening and trusting our coaching staff, coming in with a positive mentality everyday and bringing a strong work ethic.”

Boston College broke out to a slim 15-11 lead midway through the first before Clemson responded with a run 7-2 run of its own to take an 18-17 lead. From there, the score was evened five times in the set.  A kill by Boston College’s Lynn Braakhuis prompted Franklin to call timeout. An attack error by Jaden Light then put the Eagles in position to claim the set with the score at 24-23, but a Harvell kill from on a pass from Hayes gave Clemson the side out and put Ally Gamble behind the service line. With the score tied 24-24 and Gamble serving, Korte posted back-to-back kills to claim the set in favor of Clemson, 26-24. Korte tallied seven of her 15 kills in the first set, while posting an efficient .417 hitting percentage. Hayes also racked up 12 assists to open the match.

The Tigers carried momentum into the second, jumping out to 18-11 lead. Clemson took eight of the next 12 points, winning the second set, 25-16. Harvell, Hayes and Korte tallied three kills each in the third. Hayes also dished out seven assists for the set.

Coming out of the break, the Tigers leaped out to an 8-2 lead, a run that featured back-to-back Hayes service aces before the Eagles called timeout. Clemson extended the lead to 24-20 on another Korte kill from Hayes. The Eagles took the next two points before Franklin utilized a timeout to break up their momentum. Coming out of the timeout with Boston College behind the service line, Korte controlled the Eagle serve, passing the ball to Hayes, who then lobbed it back to Korte on the outside. Korte pummeled the ball into the floor, igniting the home crowd and giving the Tigers their first conference win of the season.