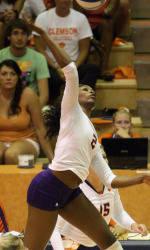 Wednesday’s match will be Club Volleyball night, where club teams are encouraged to attend in clubs attire. Solid Orange Friday pits Clemson against Georgia Tech in the ACC season-opener, which will also be student appreciation day. The first 100 students will receive a Clemson Volleyball t-shirt, and students who attend will receive double frequent fan points.

Clemson’s match will be available on TigerCast live, with Brittany Fennell providing commentary. Livestats are available for all matches as well on ClemsonTigers.com.

Clemson and Furman have had an excellent rivalry recently. Michelle Young, the former Michelle Thieke, was a four-year letter-winner for Jolene Hoover from 1994-1997, and is still second on Clemson’s all-time list in assists. She was named to the ACC’s 50th Anniversary team as a player in 2002 as well.

Clemson holds a 35-1 record against the Paladins all-time, but the most recent meeting, in 2009, went to five sets. Additionally, the teams play often in the spring.

Each of the last six and seven of the past nine matchups between Clemson and Georgia Tech have gone to five sets. Last season, the teams split, with each winning on their home floor. Clemson holds a 33-23 lead in the all-time series.

Clemson enters the match riding a three-match winning streak after winning the College of Charleston Invitational with 3-0 mark. Alexa Rand was named the tournament’s Most Valuable Player, while Sandra Adeleye and Hannah Brenner were each named to the All-Tournament team.

Adeleye leads Clemson with a 3.49 kills per set average, and four other Tigers average more than two kills per set. She ranks first in the conference with a .422 hitting percentage and sixth in the ACC in kills. Rand will be in search of her 500th career kill this weekend, as she enters with 484 career kills, and is third in the ACC in hitting percentage and fifth in the league in blocking.