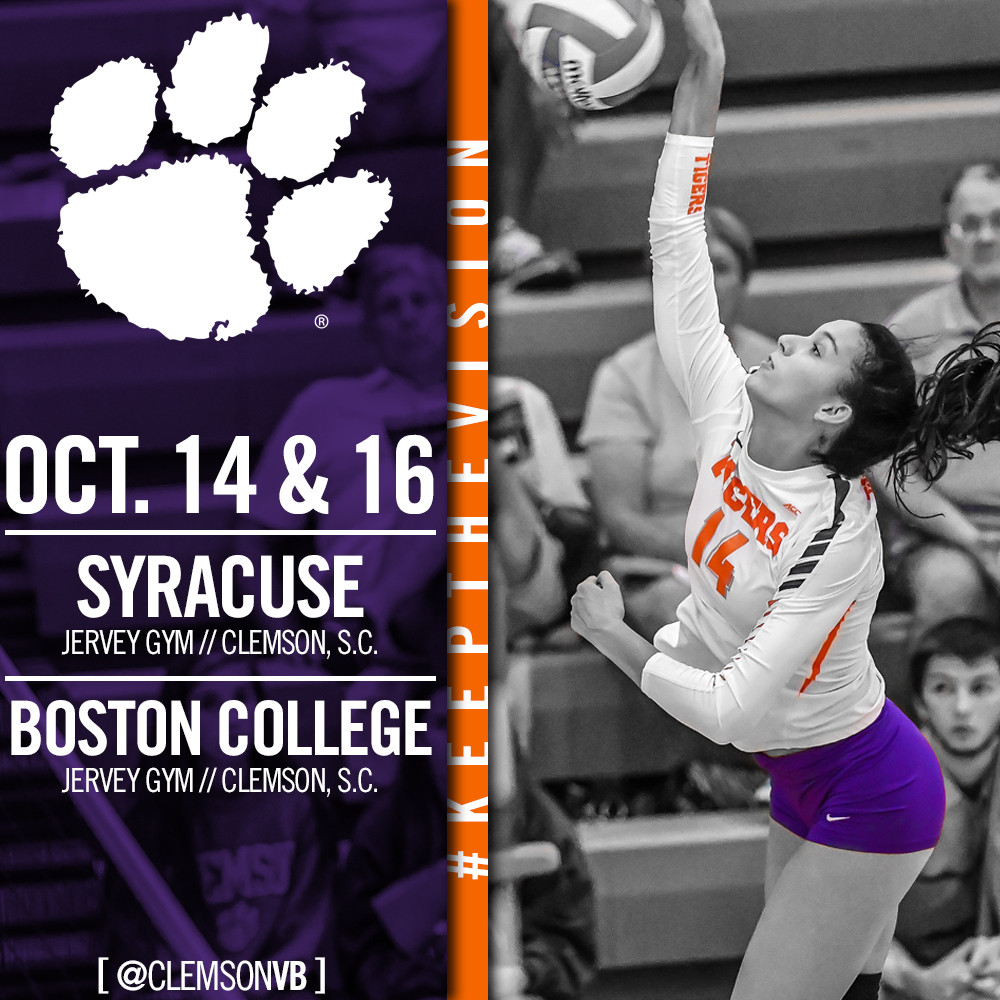 CLEMSON, S.C. – On Friday, October 14 the Tigers (5-13, 0-6 ACC) are back in Jervey Gym and ready for a 7:00 p.m., matchup with Syracuse (4-12, 3-3 ACC) before finishing this weekend’s contests with a 1:00 p.m., meeting with Boston College (5-11, 0-6 ACC) on Sunday, October 16. Clemson’s match against the Eagles is its annual Dig Pink match as the Tigers and the Sideout Foundation team up to make a difference in the fight againts breast cancer. Both, the Orange and the Eagles will be tasked with stopping one of the most feared hitters in the ACC.

Leah Perri is just one-of-two ACC volleyball student-athletes to be responsible for 30% of their team’s total offense and her 300 points are the second most recorded in the conference.  Through 18 matches she’s credited with 257 kills which currently stands as the fifth highest total in the conference. The Richland, Michigan native has 10 kills or more in 15 of the 18 matches played this season and she has eclipsed the 20-kill plateau five times this season. Perri had five matches in 32 matches last season in which she registered 20 kills or more.

The Tigers remain one of the top serving teams in the conference as they’ve aced opponents 94 times this season for a 1.36 aces per set average. Both figures rank Clemson third in the conference. Perri leads the group with a career-best 19 aces on the season with fellow senior, Sydney Moseley not far behind with 17 in 2016. Keely Hayes aced the Cavaliers twice her last time out to tie Kailey Harvell with 12 this season and Ally Gamble added her 11th of the season this season against Virginia.

Hayes isn’t posting the same numbers she did earlier in the season due to Clemson switching to a 6-2 offense but she still ranks among the ACC’s best with 579 assists and an 8.39 assists per set average. The total places her fifth in the conference while the average is currently the ninth best in the ACC.

Megan McGinley and Jaden Light continue to block at a solid rate as McGinley’s 64 blocks ranks her sixth in the ACC while Light leads the team and isn’t far off from the top-10 in the ACC, averaging one block per set.