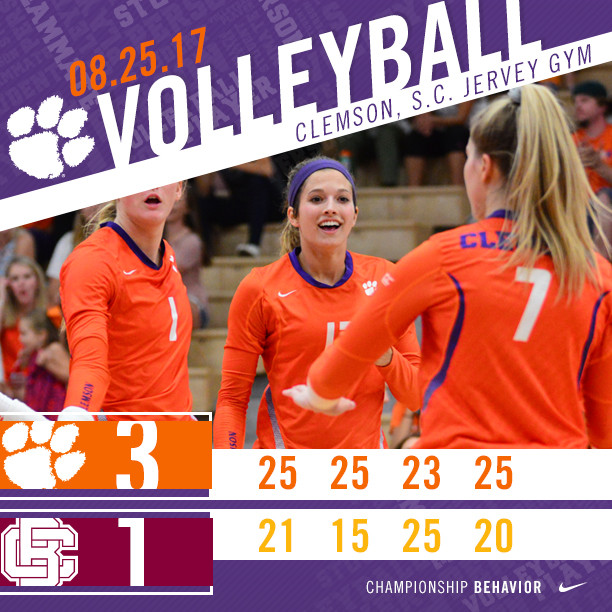 Volleyball Opens 2017 With A Win

“I thought Megan [McGinley] got hot towards the end when we really need her to,” Franklin said after the match. “In tight moments, most importantly, she was demanding the ball, which is really impressive. I thought Kailey [Harvell] did a good job of starting off hot. She faded a little, but then she came back, and that’s very impressive to be able to do that.” Franklin added, “I thought Kaylin [Korte] had a nice night reaching double digits, having a double-double in both kills and digs.”

The Wildcats jumped out to a 10-6 lead in the first set, but the Tigers stood their ground, scoring the next four points, three of which were assisted by junior setter Caroline Pearson, a transfer from Arizona State, to even the score, 10-10. Clemson came back to claim the first set, 25-21, in large to Harvell’s six kills.

The Tigers carried momentum into the second set, rallying off six straight points to take an early 6-0 lead. A service ace by McGinley later in the set gave Clemson its largest lead of the match, 19-7. The Tigers went on to claim the second set and a 2-0 lead heading into the locker room at the break.

Bethune-Cookman cut the lead to 2-1 after Wildcat freshman outsider hitter Jordan Jefferson totaled five kills in a close third set. With Clemson down by one point, 19-18, the Wildcats tallied four straight points to extend their lead to five, which was too great a deficit for the Tigers to overcome. Bethune-Cookman went on to take the set, 25-23.

Clemson took care of business in the fourth set, jumping out to a 10-6 lead, which the Wildcats could not recover from. Clemson was led by Korte in the final set, who racked up five kills, all of which were assisted by Pearson. 19 of Pearson’s 57 assists came in the fourth and final set, which the Tigers won, 25-20.

Friday’s win snaps a 12-match losing streak for the Tigers, dating back to last season, when Clemson edged Boston College in five sets on Oct. 16.

The Tigers will face Jacksonville (1-0) at 12:30 p.m. and Lamar (0-1) at 7 p.m. on Saturday. The Dolphins and the Cardinals squared off in the first match of the Big Orange Bash on Friday in which Jacksonville defeated Lamar, 3-1.

Saturday’s contests against Jacksonville and Lamar will air on ACC Network Extra via watchespn.com and on the WatchESPN app. Live stats can be accessed on ClemsonTigers.com.

Admission is free for all 2017 home Clemson volleyball matches. For complete coverage of the Tiger volleyball team, follow @ClemsonVB onTwitter and Instagram, @ClemsonVolleyball on Facebook and ClemsonVBall on Snapchat.