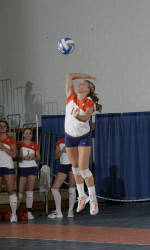 Volleyball Opens 2006 Season at the Mortar Board Premier on Friday

CLEMSON, SC – The Clemson volleyball team will open its 2006 season at the Mortar Board Premier, hosted by Purdue University, in West Lafayette, IN from Aug. 25-26. The Tigers will face the Bradley Braves at 5:00 pm on Friday evening before Saturday’s matches against Northern Iowa at 12:00 pm and Purdue at 7:00 pm.

Fans can follow all three matches on the Internet via livestats at www.purduesports.com. Saturday night’s contest against the Boilermakers will also be broadcast over the radio and on Purdue’s website.

The Tigers boast one of the top outside threats in the conference as preseason All-ACC selections Jeannette Abbott and Brittany Ross return for their sophomore and junior seasons, respectively. The two combined for 1,040 kills last season.

Also along the net, Clemson returns middle blockers Danielle Hepburn, Megan Steiner and Laura Boozer, and right side hitter Leslie Mansfield. Hepburn started all 30 matches last season and set a program freshman record with 143 total blocks. Boozer, who has the ability to play all three positions at the net, started 14 matches last season while Steiner was sidelined with an injury. Steiner tallied 145 kills last season in just 70 games played. A healthy Mansfield could be one to watch. The junior suffered a shoulder injury last year that limited her attacks but is healthy for the 2006 season.

In the backcourt, starting libero Anna Vallinch will begin her senior season, while defensive specialists Sue Eckman and Katie Bridges also return. Vallinch needs just 363 digs to set the Clemson career record after recording 620 in 2004 and 541 in 2005. Eckman started 14 matches and played in all 118 games last season to total 229 defensive saves. Bridges saw action in just one game in 2005, serving two points in a Tiger victory.

Scouting Bradley Bradley returns nine letterwinners, including four starters, for the 2006 season. The Braves posted a 16-17 record last year and finished sixth in the Missouri Valley Conference with a 9-9 league mark.

Clemson and the Braves have met five times on the volleyball court with the Tigers leading the series, 4-1. Clemson also holds a 2-1 advantage in matches played on neutral courts. The Tigers defeated Bradley, 3-0, in the last meeting between the two schools in Tuscaloosa, AL during the 1993 season.

Scouting Northern Iowa The Panthers of Northern Iowa are coming off a 20-win season a year ago and bring back six starters from that squad. Northern Iowa also compiled a 12-6 conference record to finish fourth in the MVC.

Clemson and Northern Iowa have met on just one previous occasion. The Tigers claimed that match, upsetting the 21st-ranked Panthers, 3-1, in Clemson, SC.

Scouting Purdue The Purdue Boilermakers return six starters and their libero from a team that reached the Elite Eight of the 2005 NCAA Tournament. Purdue posted a 25-9 overall record last season with a 12-8 ledger in Big Ten play.

Saturday night’s meeting between the Boilermakers and Tigers will be the first in history on the volleyball court.