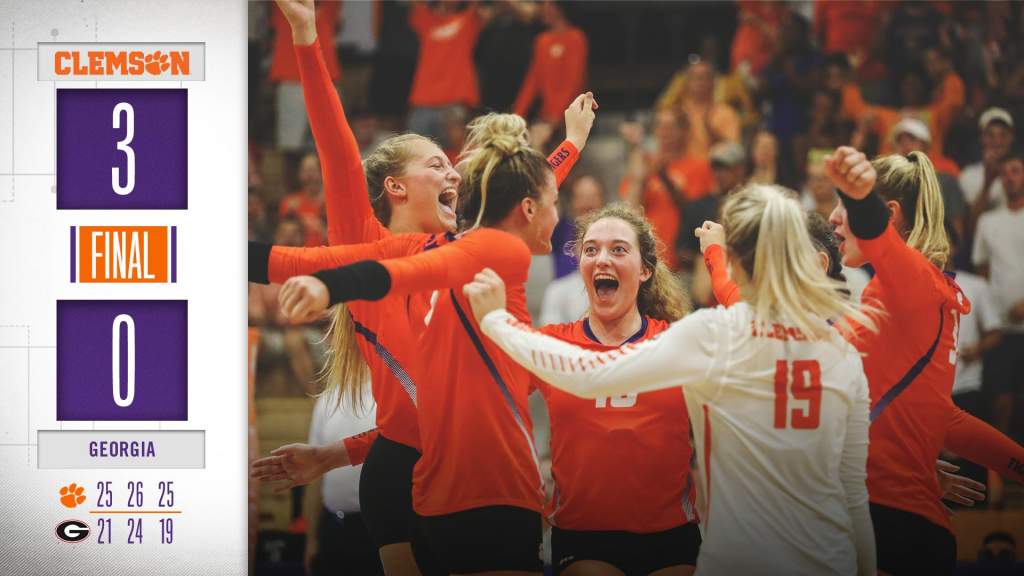 CLEMSON, S.C. – In her first return to the floor after being sidelined last season due to a knee injury , Clemson redshirt-junior Kaylin Korte posted her sixth career double-double with 10 kills and a match-high 14 digs in the Tigers’ 25-21, 26-24, 25-19 sweep over Georgia Friday night in Jervey Gym. Clemson, now 1-0 on the season, outhit the Bulldogs .367 to .247 for the match and was propelled by a late second-set 8-3 run.

In addition to Korte, the Tigers received an offensive boost from sophomore right side hitter Solei Thomas, who also recorded double-digit kills – with 11 – and hit .400 for the match. Freshman setter Mckenna Slavik dimed 40 assists in her Clemson debut, while adding a match-high five blocks alongside freshman middle blocker Annika Clark.

The Tigers also combined for eight service aces – two more than Georgia. Behind the service line, Clemson was led by junior Madi Howell, who got the nod at libero and posted a match-high three aces, including a crucial late second-set ace to give the Tigers a 25-24 advantage. Then, Clark and junior middle hitter Alyssa Deloney came up with a huge block that sent the ball straight to the floor on the Bulldogs’ side of the net, giving Clemson the point (26-24) and a 2-0 lead heading into the break.

Coming out of the break, Clemson did not let up, sparking a 13-3 run, a deficit the Bulldogs could not recover from. The Tigers took set No. 3, 25-19, with the help of five Korte kills, including the final point to seal the match.

Up next, the Big Orange Bash resumes Saturday, Aug. 31 as Clemson hosts Wofford (10 a.m.) and Kennesaw State (7 p.m.). Both matches are set to air on ACC Network Extra (ACCNX).

Get to Jervey early tomorrow and watch @ClemsonVB take on Wofford at 10 AM!