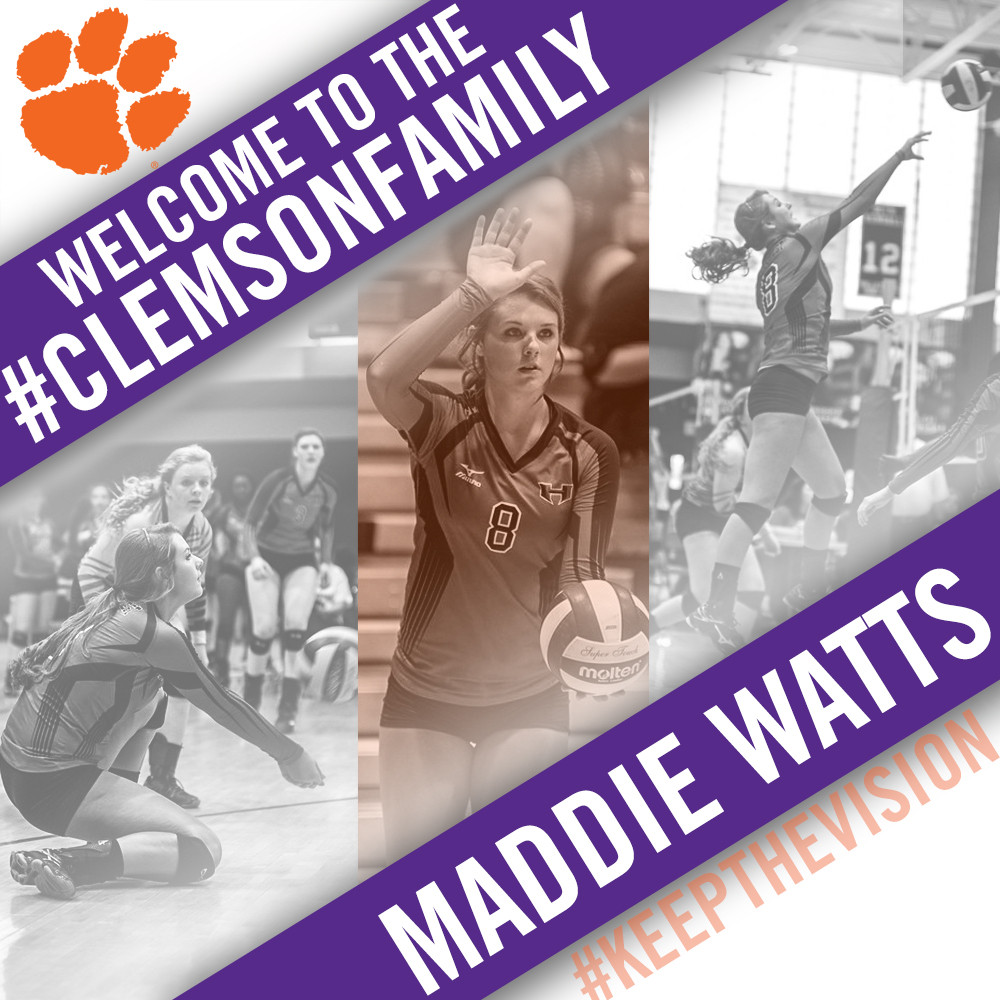 Watts currently attends Hillcrest High School and has developed her skills under the tutelage of Lynn Avant and her club coach, Kevin Wentzel of Upward Stars. When she arrives, she plans to study Health Science in the Clemson University Department of Public Health Sciences.

“Coming to Clemson is a dream come true for me,” said Watts. “I have always been a Tiger at heart because my family has a strong Clemson legacy. Playing volleyball is my passion. So, having the opportunity to play for Clemson is the package deal for me.”

Her aunt, Wendy Willis Rausch, was a 1995 Clemson graduate and was named Miss Clemson University in 1992. Watts’ uncle, Dustin Willis, graduated Clemson in 2000 and was President of the Fellowship of Christian Athletes. Her aunt, Renie, and uncle, Leo, were both graduates of Clemson as well.

“I am most excited about playing for Clemson because of the culture Coach Hugh and Coach Steph are creating as well as their desire to be great,” Watts added. “The players were welcoming from the first day I met them. They have bought into the culture and vision that the coaching staff has challenged them with. I am so excited to be a part of this Clemson Family. It truly is a dream come true!”

“The addition of Maddie to our program is great on a number of fronts,” said head coach Hugh Hernesman. “Maddie is, first of all, a talented player that we believe can contribute as a libero/defensive specialist. She’s got length at that position that can be a real asset when you start looking at defensive range. I also believe Maddie’s serve can be a real weapon. As a very successful outside hitter in high school and in her early club years, Maddie will have a different perspective in the back court than those that have been at that position exclusively. I believe that our training style will help Maddie grow and adapt at the collegiate level.”

Watts joins the program as a student-athlete that knows how to win. Over the course of her club and high school career she has earned four regional championships, seven state championships and was the captain of her AAU National Championship team in 2015.

“Maddie Watts is a perfect fit for Clemson,” said Upward Stars Club Director, Corey Helle. “She can play multiple positions at a high level and she bleeds Orange and Purple. She is going to be a great addition for Coach Hernesman and Tiger Nation.”

Coach Hernesman recognizes Watts’ strong passion for volleyball and Clemson University and he believes that those qualities will be a key asset to the program’s culture moving forward.

“From a culture perspective, Maddie comes from a Clemson family and understands the true opportunity that exists here at Clemson,” Hernesman said. “I’m thrilled that Maddie will continue the family legacy here at Clemson and I know her family is as well. We’re starting to realize more and more what an incredible place Clemson is as time goes on for our staff- and how we can build this program into something great- but Clemson people already know that. That is a real positive when it comes to building a championship culture.”

“Additionally, Maddie has been on some great teams, including winning a National Championship with her club team at AAU’s last summer. Being a part of successful programs helps to understand how vitally important every role is and what it takes in the gym and as a teammate. It is very valuable experience and we’re fortunate to be able to add that to our program.”

“Maddie Watts is an unbelievable all-around player who can fill any role and always brings her best,” said Wentzel. “She is a great leader and teammate and a perfect fit for the Clemson Tigers.  I have no doubt that she is ready to rise to the challenge and can’t wait to see how far her energy and abilities can take her.”

“Maddie is a very unique athlete,” Upward Stars Assistant Coach, Stephanie Palmer added. “Her versatility makes her a coach’s dream player. If you need her to pass, she can pass. If you need her to hit, she can hit. If you need her to set, she can set. Clemson is very lucky to have such a well-rounded student-athlete joining their program. I am very proud of Maddie, and can’t wait to see what The Lord has in store for her as a Clemson Tiger!”