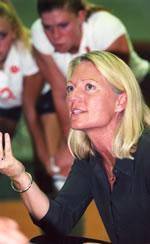 Clemson volleyball will host the Georgia Bulldogs in a One Clemson…Solid Orange event Tuesday evening at Jervey Gym. First serve is scheduled for 7:00 PM and admission to the match is free. T-shirts will be thrown out during the match.

The Tigers are 7-2 on the season, having claimed the Big Orange Bash title over the weekend. Clemson defeated Coastal Carolina, Central Michigan, and Louisiana-Lafayette to win the tournament. The wins improved the Tigers’ home record to 7-1, with the only loss coming to Winthrop in the Clemson Invitational.

Clemson has been led all season by senior captain Leslie Finn. She earned Big Orange Bash MVP honors last weekend after she totaled 60 kills and nine service aces over the two-day event. Finn leads all Tiger hitters with 161 kills, a 5.37 per game average, and is tied for the team lead with a .338 hitting percentage.

Lori Ashton and Brittany Ross were also named to the All-Big Orange Bash team. Ashton is third on the team with 105 kills and is tied with Finn’s .338 hitting percentage for the team lead. She also has 30 total blocks this season. Ross, a freshman outside hitter, has 123 kills and a 3.97 per game figure.

Georgia enters Tuesday’s match with a 4-2 record, but the two losses were to nationally-ranked opponents. The Bulldogs took #2 Southern Cal and #18 Pepperdine both to four games. Georgia won its own Invitational over the weekend, notching wins over Elon, Louisiana-Monroe, and Virginia Tech.

The Bulldogs are led by Alexandra Oquendo, who has a team-best .365 hitting percentage and 30 total blocks. Julia Petruschke leads the squad with 94 kills, while Meagan Welch has a team-high 83 digs through six matches.