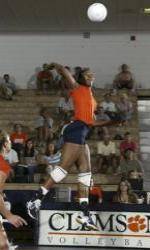 Clemson volleyball will play host to the annual Big Orange Bash this weekend at Jervey Gym. Competing in the event will also be Central Michigan, Coastal Carolina, and Louisiana-Lafayette. Four matches are scheduled for Friday, with the final two coming on Saturday.

Clemson enters the tournament with a 4-2 overall record. In their most recent action, the Tigers fell 3-0 at South Carolina Tuesday night. Clemson will begin at 1:00 PM on Friday with a match against Coastal Carolina, then finish Friday with a 7:00 match versus Central Michigan. The Tigers conclude the tournament with a 12:30 match on Saturday against Louisiana-Lafayette.

The Tigers are led by a pair of seniors, Lori Ashton and Leslie Finn. Middle blocker Ashton earned MVP honors at the Clemson Invitational one week ago and is the team leader with a .324 hitting percentage. She also leads the squad with 24 total blocks. And is third on the team with 70 kills. Finn, an outside hitter, leads the team with 101 kills and a 5.05 per game average.

Central Michigan is 1-2 on the season, with a win over Wisconsin-Green Bay in the CMU Super 8 Invitational last weekend. The Chippewas are led by Emily Lovejoy, who has a team-best 69 kills and .333 hitting percentage.

Coastal Carolina enters the tournament with a 2-1 record, having won two straight after falling to Dayton in the season opener. The Chanticleers are paced by setter Jennifer Hampton, who is averaging 10.73 assists per game, and Krista Kimble, who leads the squad with a .345 hitting percentage.

Louisiana-Lafayette is 2-5 on the season. The Ragin’ Cajuns fell to Tulane in their most recent action Tuesday night. The Cajuns are led offensively by Elina Salomaki, who has a team-high 84 kills.

The first match is scheduled for 10:00 AM both days, with the final Friday match coming at 7:00 PM and the final event match taking place Saturday at 12:30 PM.