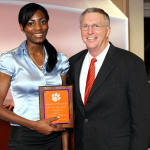 Sue Eckman, Didem Ege and Danielle Hepburn collected multiple team awards, which are voted upon by the players, at the event. Hepburn was selected as the Bernard Caffrey Most Valuable Player for the second straight year. The award is given to the student-athlete, who by virtue of her athletic talents, made the most visible impact on the volleyball team during the season. Hepburn, a junior from Miami, FL, set a school record with her .395 hitting percentage for the year and currently holds the career records for hitting percentage (.342) and blocks per game (1.46).

Hepburn was also named the Best Offensive Player, while Ege took home the honor for Best Defensive Player. Ege, a libero from Istanbul, Turkey, was selected to the First-Team All-ACC with a 5.39 digs per game average. The figure set a Clemson record, while her 615 total defensive saves were just five shy of Anna Vallinch’s program-best 620. Ege also received the 3.0 Passer Award, which recognizes the player with the highest passing percentage.

Eckman earned the Dedication Award and the Tiger Spirit Award. The strength dedication award is designed to honor the individual athlete who has, through dedication and commitment in the weight room, improved her performance on the court. Meanwhile, the spirit award is given to the player who seeks to bring out the best in her teammates and unselfishly devotes herself to reaching the team’s goals while inspiring others. A senior from St. Charles, IL, Eckman played in all 114 games this season as a defensive specialist. She led the team with 36 service aces while tallying 254 digs.

Meghan Steiner was presented with the National Strength & Conditioning Association All-American Award, which recognizes collegiate athletes whose athletic accomplishments, in the opinion of the strength coach, reflect their dedication to strength training and conditioning. These athletes are also recognized for their academic and personal accomplishments as well as their integrity as student athletes.

Red-shirt junior Laura Boozer received the Practice Player Award for her selfless contributions to the betterment of the team. She was also given the award for the 2006 season.