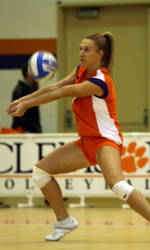 CLEMSON, SC – The Clemson volleyball team will travel to the west coast for the latter part of the week to wrap up its spring season. The Tigers will take on the University of San Diego on Thursday night and will then participate in the 2008 College Beach Nationals on Sunday in San Diego.

Rising seniors Jeannette Abbott and Danielle Hepburn lead the Clemson squad, while Didem Ege and Kelsey Murphy were named Honorable Mention AVCA All-Americans as sophomores in 2007. All four have etched their names in the school record books and helped the Tigers win an ACC Championship and reach the second round of the 2007 NCAA Tournament.

The Toreros finished the 2007 season with a 21-8 overall record, falling in the first round of the NCAA Tournament. They were ranked 25th in the final CBS College Sports Network/AVCA poll.

The Collegiate Beach Volleyball Championship, which will take place at Mariners Point in San Diego, features a team-style format with each school fielding four teams of two players. Following the conclusion of the event, one school will be awarded the overall Championship. All six team’s in this year’s competition finished ranked in the 2007 CBS College Sports Network/AVCA Coaches Top 25 Poll, including No. 3-ranked USC, No. 5-ranked Nebraska and No. 6-ranked Texas.