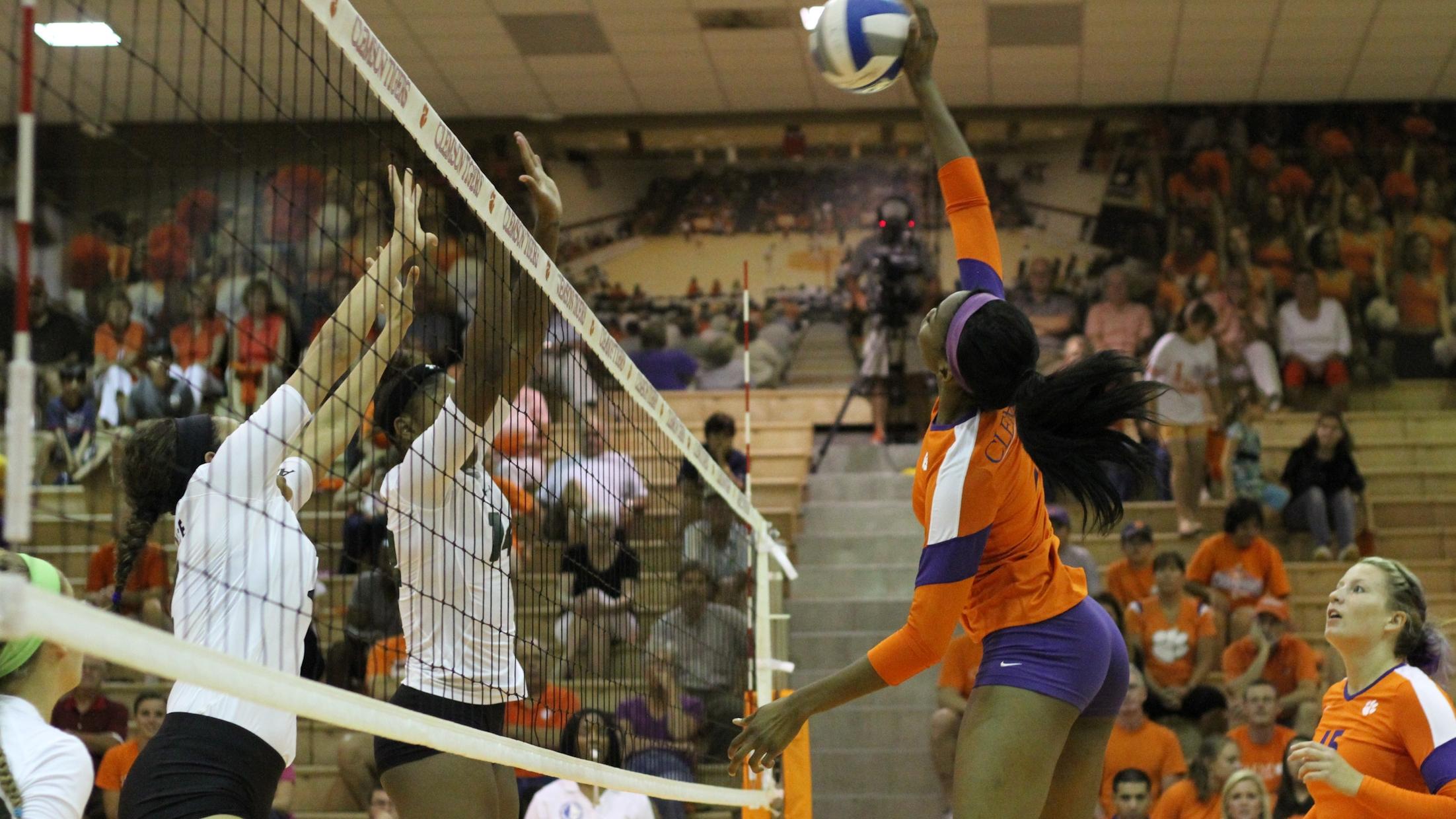 CLEMSON, SC – The Clemson Volleyball team will go on the road to Columbia, SC this weekend to take part in the Carolina Clash, hosted by South Carolina. Clemson (6-1) and South Carolina (8-0) will  play at 7:00 pm on Friday at the Volleyball Competition Facility in what has been a tight series recently. Clemson will then play Winthrop (3-4) on Saturday at 1:30 pm and UAB (4-4) at 5:00 pm. Clemson’s match against South Carolina will be available to view online courtesy of Gamecocksonline.com. Livestats for all three matches are at ClemsonTigers.com. The matchup with South Carolina is intriguing for the Tigers, who have won two straight in the series, despite the Gamecocks holding a 34-22 all-time edge. The Tigers won 3-0 (25-16, 25-22, 25-18) last season in Charleston, SC. Similar to this season, South Carolina will enter their match with the Tigers with a perfect record. Last season, they were 7-0 entering the match, and they are off to an 8-0 start this season. This year, the match is on South Carolina’s court, a gym in which none of Clemson’s current players have played a collegiate match, except for a spring scrimmage in April of this year. There have been two common opponents between the teams in the early part of the season. The Gamecocks held on against East Tennessee State to win 3-2 on Aug. 25, while Clemson defeated the Bucs in three on Sept. 1. Also, Clemson defeated the Slovenian National Team, 3-2, a day before the European club went to Columbia and grabbed a 3-0 win. The Tigers are 3-5 all-time against UAB, but have not played since 1988. Clemson holds a 22-13 mark over Winthrop, going 7-5 in neutral site matchups. Three Tigers enter the match averaging more than three kills per set in Mo Simmons (3.70), Sandra Adeleye (3.22), and Kristin Faust (3.13). Faust has three double-doubles this season to lead the team, and her 3.22 digs per set average is behind only senior libero Natalie Patzin, who is averaging 4.48 defensive saves per set. Clemson is averaging 1.91 aces per set, which has helped fuel their offense, and the defense is tallying an average of 2.43 blocks per set, with Simmons and Rand leading the way in that category. Hannah Brenner leads the ACC with an 11.35 assists/set average, and has guided Clemson to a .293 hitting percentage on the season so far. 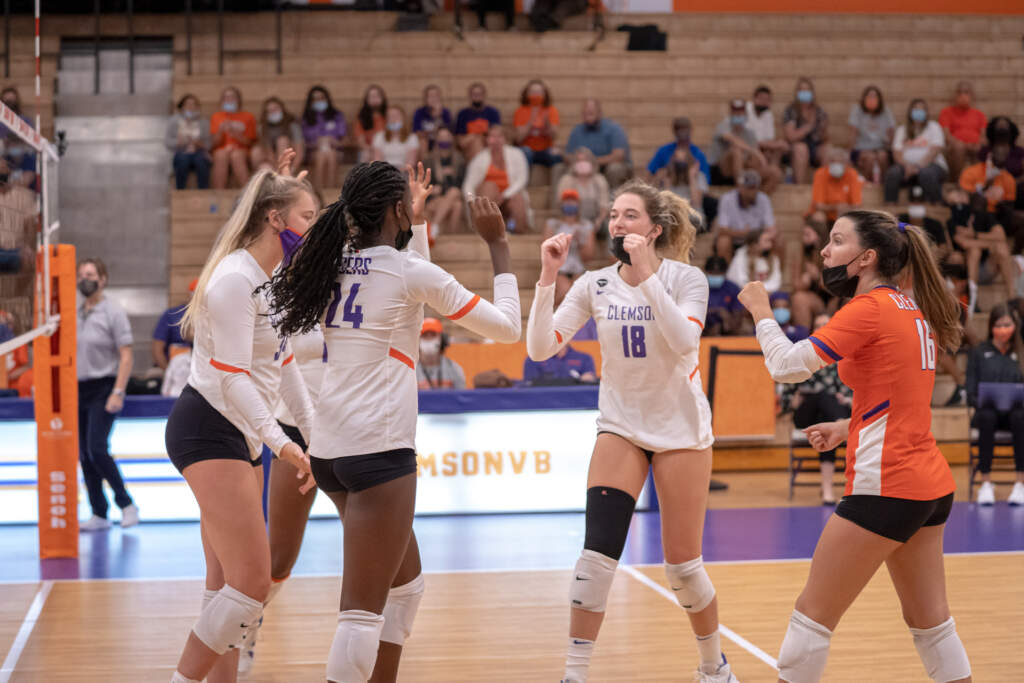 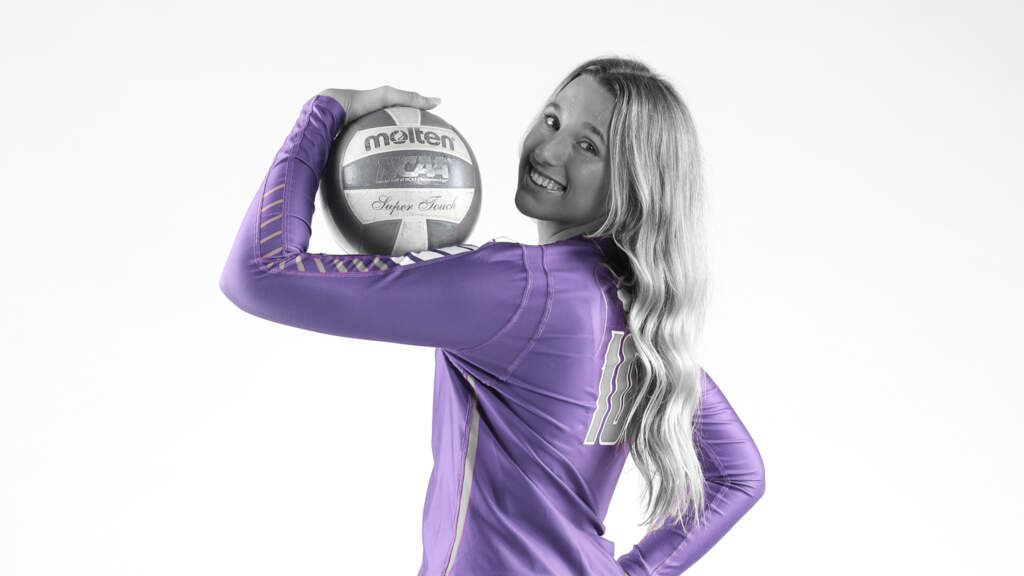